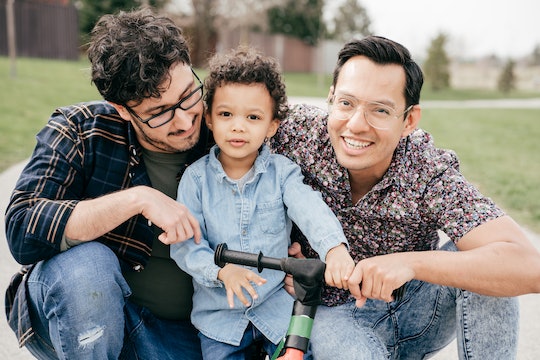 We Should Really Stop Using The Phrase "Put Up For Adoption"

Today, for Birth Mother's Day, a dad through adoption explains the painful history of a commonly-used phrase

My husband Rich and I flew six states away to meet our son’s mom when she was six months pregnant with him. We brought her black-and-white cookies, a symbol of our New York City home. On a sticky July day, the three of us sat under a huge elm tree, far older than any of us. She shared stories from her growing-up and her dreams for her child. She told us that she doesn’t like gendered words like “dude” or “bro” and asked us to avoid them as we raised him. We shared our favorite pizza toppings and talked about how we like to celebrate Christmas. She brought us with her for an ultrasound where she could introduce us, in a way, to the baby.

This was the beautiful beginning of my family. We were knit together under that elm and pulled together through tears in that ultrasound booth. It was not a “putting up” or a “giving up. ” As a dad through adoption I’m surprised how often I see and hear those painful phrases. Well-meaning if nosy parents on the playground ask me why my son’s mom "put him up for adoption." Quarantine memes joke about putting kids who don’t like Zoom school up for adoption, and NPR’s Weekend Edition just used the phrase “Put Up For Adoption” in a headline. (Okay, so they were talking about 140 goldfish found in a man-made pond outside of Washington, DC, but it was still the wrong way to describe the scene).

The way Rich and I adopted our son Luke has nothing to do with the dislocation created by the orphan trains. We did not select our son on a train platform or pick him for his ability to do farm work. We didn’t choose him at all; our son’s mom chose us.

The phrase “put up for adoption” has hidden, horrible roots. Starting in the 1850s, so-called “orphan trains” carried more than 120,000 children out of New York City and away from the families they were born into. This social experiment was intended to “resettle poor and orphaned children living in New York City with farm families in the West to deter them from a life of crime and poverty,” according to Children’s Aid — the organization that ran those orphan trains for more than 50 years, into the 1900s. Their slant on this sounds optimistic, even revisionist, to me.

“There were no legal ties between these children and the farmers who took them in," writes Michelle Kahan in “Put Up” On Platforms: A History of Twentieth Century Adoption Policy in the United States. "The Children's Aid Society announced to the local community that a train would be arriving. When it did, the children stood on the platform waiting to be claimed." Kahan explains that children were put up on display at one train stop, and if they weren’t selected, they were herded back on the train to chug to the next station.

The way Rich and I adopted our son Luke has nothing to do with the dislocation created by the orphan trains. We did not select our son on a train platform or pick him for his ability to do farm work. We didn’t choose him at all; our son’s mom chose us.

Our plan to become parents through adoption was vetted by two social workers, an adoption attorney representing our birth mother and another representing my husband and me and finally a judge. We had a home study, shared financial information, our work histories and our career prospects. We were required to share our parenting philosophies and agreed we’d never spank. We submitted background checks and took mandated classes — and we were glad to do it. Some male-female couples make awkward jokes: they didn’t have to go through any of this screening to have a baby the old-fashioned way.

The inaccurate language about adoption needs to stop. We need to talk about these experiences more openly, more accurately, and with more respect.

We all need to know better than to use the same phrase to describe 21st century open adoptions. According to census data, there are over 2 million adoptees in the US. That’s equally to the entire populations of Maine and Montana. Kids like my son were not “put up” and no one gave them up for anything — they were carefully nestled into their childhoods by their first mothers.

Birth mothers who choose adoptive parents for their kids face one of the most difficult decisions in the human experience. Our language needs to honor them. Birth mothers review profiles of prospective adoptive parents, ask questions and get to know couples like my husband and me. Even after birth, they can reconsider their decisions to place the child until the adoption is finalized. These first moms are doing their best to form their baby’s future. We need to use our words to celebrate these women, and destigmatize adoption by retiring inaccurate language.

Of course, cutting out the “putting up” is only our first step. What if parents cultivated “family literacy” like they did financial literacy? Perhaps the media would be at least as accurate and intentional talking about birth mothers and adoptive parents as they are talking about bitcoin and NFTs. As we head back to the office and back to school, birthday parties and playdates, we can perk our ears up for stories from all sides of the adoption triad: adoptees, birth parents and parents through adoption. The inaccurate language about adoption needs to stop. We need to talk about these experiences more openly, more accurately, and with more respect.