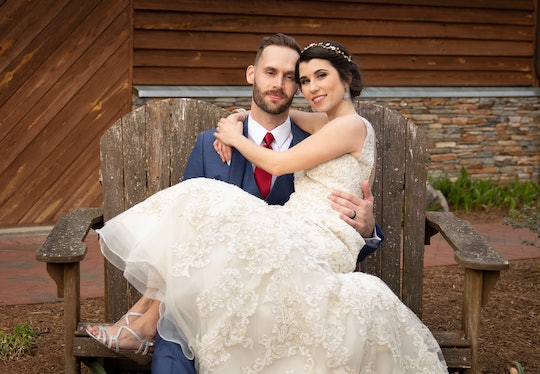 Married at First Sight returns to Lifetime this summer with a new crop of singles getting hitched and hoping for the best. Among this season's four couples are Matt Gwynne, 32, and Amber Bowles, 27. The first thing that jumps out about them from the wedding photos People revealed is a pretty adorable height difference. An international basketball player, Matt towers over Amber at 6'9, so viewers may be wondering what basketball team Matt from Married at First Sight played for. As it turns out, his basketball career has a lot to do with why he joined the show.

Matt's career kicked off in college, where he played two seasons as a forward/center for the University of Tennessee at Chattanooga Mocs from 2006-2008, according to ESPN. Then, he transferred to Campbell University in Buies Creek, North Carolina, where he played for the 2008-2009 season. In 2010, Matt entered the NBA Draft, but he went undrafted. He's still listed as an unrestricted free agent. So, Matt went on to work with the USA Select International Tour, which "was formed to assist American basketball players find professional opportunities internationally," according to its website. He spent the 2016-2017 season playing in the Liga Nacional de Baloncesto Profesional (LNBP), Mexico's top professional basketball league, which was established in 2000. They only have 11 teams, but the league is well-regarded in Latin American professional basketball.

Matt played power forward for the Barreteros de Zacatecas, according to his season highlights reel, above. They represent Zacatecas, Mexico, which plays in the Southern Division of the LNBP. He was part of a fairly tumultuous time at the franchise; in 2010, the team announced they wouldn't be playing in the league, which left the region without a professional team for the first time since the league was founded. They reemerged in 2011, shut down again for the 2013-2014 season, played in 2015-2015, skipped the 2016-2016 season, and then reappeared for the 2016-2017 season, which Matt played for. In 2017, the franchise was purchased by the Government of the State of Zacatecas and renamed the Mineros de Zacatecas.

Matt admits in his Lifetime bio that his international touring schedule is partly responsible for why he's still single. He says that playing professional basketball internationally takes him out of the country for several months a year, which makes it extremely difficult to date, let alone sustain a relationship. Among the qualities he's looking for in a match is someone who can hold it down while he's away without the relationship crumbling.

“I’m getting married at first sight because I like to take risks. No risk, no reward,” he said in an interview with People. “I’m single. I’ve been a hopeless romantic my whole life, so why not?”

Will his bride-to-be be able to handle a long-distance, transnational marriage for half the year? Amber does seem fairly spunky and independent, but both Matt and Amber appear to be invested in a fairytale romance. It's not clear that this challenging arrangement will be the stuff of fantasies. You can see how they fare when Married at First Sight airs Tuesday nights on Lifetime.