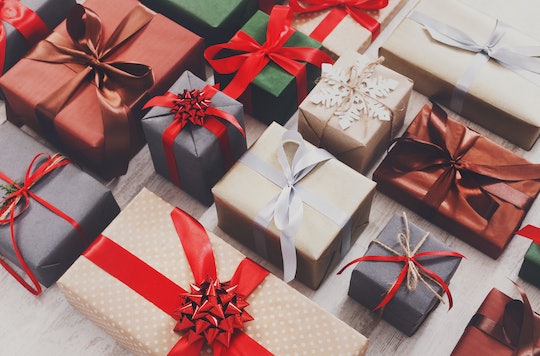 Guys, You Are Not Going To Get 36 Presents From A Secret Sister Facebook Gift Exchange

Let's go over this again, OK? (Tell your great-aunts to stop tagging you in the posts.)

The Secret Sister Gift Exchange first began making headlines in 2015, so this is actually the fifth holiday season we've been putting up with this bologna. The popular post currently circulating reads something like this, with detailed instructions following after:

Anyone interested in a secret sister gift exchange? It doesn’t matter where you live! You only have to buy ONE gift valued at $10 or more and send it to one secret sister! You will get 6-36 in return. Let me know if you’re interested and I will send you the information. (Please don’t ask to participate if you are not willing to spend the $10)

They really get you with that last line. Just a little bit of guilt and reverse psychology to send it home. Chances are, the same person who posted this also sells essential oils, and possibly supplements. They might have asked you to “join their team” selling whitening toothpastes a few dozen times, luring you with the trips to Hawaii they’ve won by “becoming an independent diamond-level contractor” for whatever MLM they’re in.

Beyond that, who the heck wants six to 30 gifts that strangers pick? You know that if you do get anything in the mail, you’ll end up getting something weird like a car charger or bubble gum flavored personal lubricant. However, even if you were interested in joining holiday fraud du jour, this "secret sister gift exchange" is simply not going to work. The scheme doesn't actually hold up mathematically -- not even a little. Back in 2015, the U.S. Postal Inspection Service tried to put an end to the Secret Sister gift hoax by breaking down the numbers for the public in a Facebook post. "Consider a typical pyramid that involves six individuals in the chain," the post reads. "Upon reaching the sixth level of participation, you’d have to attract more recruits than could be seated in Wrigley Field. The ninth level requires you to recruit all of Houston and the Washington Metro area combined — and you still wouldn’t have enough participants. The 11th round requires everyone in the United States to join in if the promise is to be fulfilled."

And it's not just the math that's faulty, it's the method, too. As the fact-checking website Snopes has pointed out, this form of chain mail is actually illegal; and I don't just mean for the organizers, I mean for the participants as well. So those “gifts” you could be getting for Christmas might also get you a nice little misdemeanor for Boxing Day.

The U.S. Postal Inspection Service (USPIS) website noted that chain letters are "Illegal if they request money or other items of value and promise a substantial return to the participants. Chain letters are a form of gambling, and sending them through the mail violates Title 18, United States Code, Section 1302, the Postal Lottery Statute."

The USPIS statement continues on to address more modern forms of chain letters such as the Secret Sister Gift Exchange. "Recently, high-tech chain letters have begun surfacing. They may be disseminated over the internet, or may require the copying and mailing of computer disks rather than paper. Regardless of what technology is used to advance the scheme, if the mail is used at any step along the way, it is still illegal."

Will you be thrown in jail for accidentally getting roped into a pyramid scheme? Probably not. But according to the Better Business Bureau, you could face penalties for mail fraud, and is that a game you really want to play when the odds are good you won't even receive one single gift in return, much less 30?

That's right, most participants in such formats never receive a single gift on their doorstep, due to the aforementioned mathematical fallout. According to Forbes, some people who join the Secret Sister Gift Exchange may receive one gift, but those would be the rare exception. So if you're itching to do a secret gift exchange this year, pass on the virtual ones and go back to drawing names with Cousin Patty or the person who reheats fish in the break room at work. Because even they will be more reliable than this.

This article was originally published on November 30, 2017