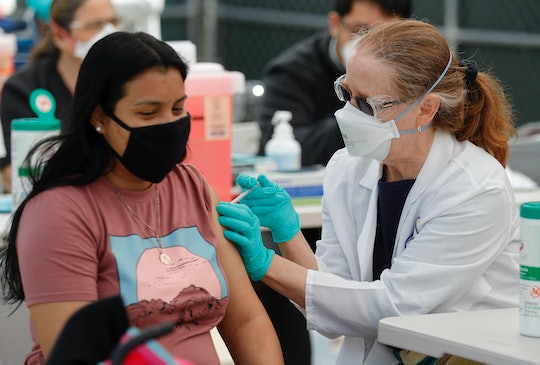 Vaccine Shedding Is Not A Thing, Experts Say

And you really don’t need to worry about it.

It now seems inevitable that some people would believe the COVID vaccine isn’t safe despite mountains of evidence to the contrary. But did you think there were going to be people who believed vaccinated people turned into scary super spreaders themselves? There seems to be a flood of posts on social media to this effect, stories swirling around that COVID can be spread by people who got the vaccine — or that the unvaccinated could possibly become infertile or have a miscarriage if they are around a vaccinated person who is “shedding.” This is dangerous misinformation. Vaccines save lives, and the COVID vaccine specifically is a critical step in getting this pandemic out the door. So let’s start with some real information: Vaccine shedding has been a fear of many for a long time. It needs debunking.

Somehow, anti-vaccine activists have managed to conflate virus shedding with vaccine shedding, without paying attention to the measurable differences between the two. Viral shedding, as per The Journal of Infectious Diseases, is the process by which a person sheds or passes on the virus while they are infectious, via a cough or fluid contamination. It happens for a finite period of time, but it places people in their general vicinity at risk for contracting the infection — you know, like COVID.

Viral shedding “is the definition of how the virus spreads and occurs when a virus is released from an infected host. Knowing the most about viral shedding helps researchers determine at what point individuals are most infectious,” says Dr. Jessica Shepherd, an OB-GYN.

"Vaccine shedding," on the other hand, is the idea that those who are vaccinated are leaving bits of the virus wherever they go as a side effect of the vaccine. While there are documented cases of this phenomenon, it's only in live virus vaccines, noted Vaccine, and even then, the risk they pose is extremely minimal in most cases.

Simply put, vaccine shedding isn’t a thing. This is because getting a vaccine or live attenuated vaccine is not the same as getting the virus, and therefore it is far less contagious. That doesn't mean that doctors should forget about the risks entirely — and they don't. They're always researching the ways vaccines interact with the community and how vaccines could affect those most vulnerable, like those who are immunodeficient or other populations like premature babies. In fact, a recent study in Pediatrics looked at babies in the NICU. All very ill or young, some were vaccinated with the live attenuated rotavirus vaccine and others were not. None of the unvaccinated babies contracted the virus, determining the risk at nearly nil. These are some of the most at-risk children around, and none of them got it.

Biotechnologist Dr. Jeremy M. Levin, chairman of the global Biotechnology Innovation Organization (BIO), tells Romper that the idea of vaccine shedding “is based on nonsense,” and that “the concept of vaccine or viral shedding revolves around live, attenuated-virus vaccines like those used in the MMR vaccine” which makes people worry that there is a theoretical possibility of the virus shedding from the vaccinated. In reality, this has only been seen 20 times since 1986, and since then, millions upon millions of vaccines have been administered. Levin stresses that for most vaccines, and most-especially the three major vaccines available for COVID, this isn’t a concern because they’re not using a live virus.

As per the Centers for Disease Control and Prevention (CDC), "Although live attenuated vaccines replicate, they usually do not cause disease such as may occur with the 'wild' form of the organism. When a live attenuated vaccine does cause 'disease,' it is usually much milder than the natural disease and is referred to as an adverse reaction." And they're highly unlikely to transmit it to anyone else, certainly not to anyone healthy.

Why The COVID Vaccines Can’t Shed

Levin explains that with the Johnson and Johnson vaccine, the injection has a viral coating that only replicates the spike proteins of COVID, and both Pfizer and Moderna inject an artificial envelope-wrapped mRNA that forces the body to then create those spike proteins, creating an immune response. None of these are live-virus, or even dead virus vaccines, and you cannot get COVID from these vaccines. “It is simply impossible,” Levin says.

As for whether or not it sheds the actual vaccine, and whether or not that can cause infertility as some claim, Levin says that isn’t the case. If it were even a remote possibility, the Food and Drug Administration (FDA) would not approve the drug.

The majority of vaccines that are given aren't live — they're what's referred to as "inactivated vaccines," such as the flu shot. They don't shed and they don't give you that virus. You don't get the flu from the flu shot. If you feel crappy after the administration of the flu jab, it's not because it gave you the flu, it's because it triggered an immune response. Good news! Your immune system is working, and now that you're vaccinated, you're far less likely to give a potentially deadly virus to someone who can't get the vaccine, like children with leukemia or HIV.

According to the CDC, the list of live attenuated virus vaccines is quite short, and limited to "measles, mumps, rubella, vaccinia, varicella, zoster (which contains the same virus as varicella vaccine but in much higher amount), yellow fever, and rotavirus." It should be noted that the first three are in a combined vaccine, limiting the risk even further.

However, there is one distinct vaccine that does shed and can be a concern, and probably the impetus for the fury over vaccine shedding, but very few Americans will ever need to worry about getting it: smallpox. It's a tricky vaccine that requires some care, according to the CDC. But unless you're traveling to a region where you're likely to encounter the disease, or you're a first responder, you're not going to get the vaccine. But, it should be noted, taking a little care and getting the shot is way better than getting smallpox.

We get that this is all scary, and that you’ve probably heard so many arguments from people you love that might try to warn you off the COVID vaccine, but worries over shedding should not be a reason to delay any vaccine, let alone one that very well may save your life.

This article was originally published on March 17, 2018