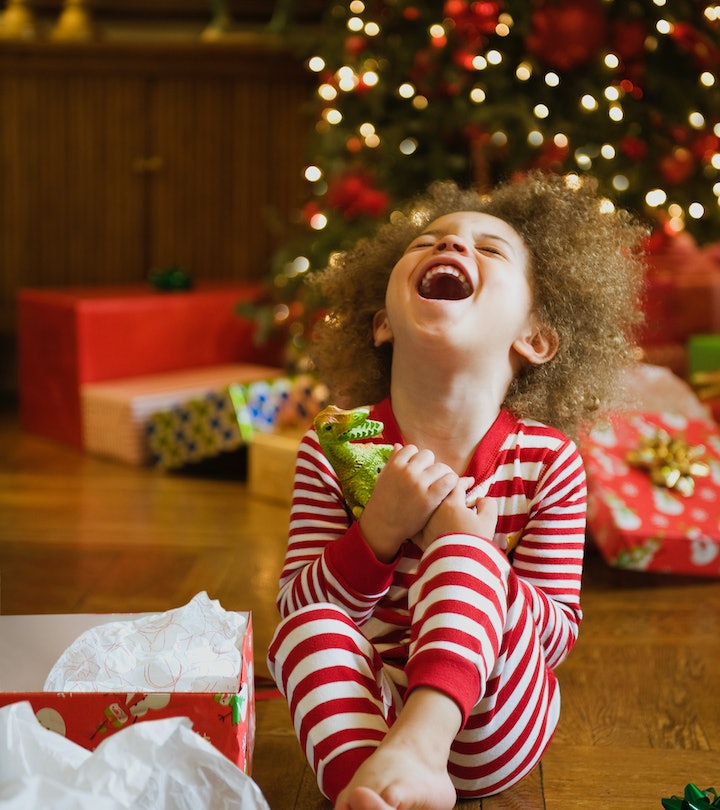 What Time Do You Open Gifts On Christmas?

And if you have early risers, do you hold the line or give in?

In households that celebrate Christmas, Christmas morning is frequently a battle between parents who want to sleep in, and kids who have waited all month, all year, and can’t wait a second longer. The overwhelm and anticipation of Christmas can actually alter kids’ brains, so even if you have a kid who is normally chill and a good sleeper, that all might go out the window around this season. So, who should win? What time should you open gifts on Christmas?

As a child, it seemed like my parents were moving in slow motion on Christmas. They would turn on the tree lights, put on Christmas music, set up the video camera, and pour themselves a cup of coffee before it was time to open gifts. My siblings and I would be around the corner in a hallway, the unwrapped presents (from Santa) and stockings so close but not visible. “Not yet!” they’d call, as they did some last, agonizingly unimportant thing, like getting milk for their coffee or fetching the newspaper. Finally, after what was, in retrospect, maybe 3 minutes, we’d hear “now!” and be allowed in.

Like many things, this seemed ridiculous to me as a child — justlet us in already! — but made a lot of sense to me once I became a parent. For one thing, I know now that anticipation of a thing increases enjoyment, and is itself part of what makes an experience fun. I also now understand the necessity of coffee. But there’s always going to be tension in the household from kids who want to get things started and adults who want to prolong the excitement.

What time do most people wake up on Christmas?

In 2015, The Upshot analyzed data captured by the fitness trackers of 500,000 people in 34 countries, and compared which countries averaged the earliest and latest rise times on Christmas morning. The earliest risers tended to live in countries in the Southern hemisphere (where it’s lighter in the morning because Christmas falls in the summer) or in countries where Christmas isn’t widely celebrated and is mostly just a normal workday. The latest-risers lived in European and South American countries where the Christmas festivities traditionally happen on Christmas Eve. In the article, Claire Cane Miller writes that “most Roman Catholic countries sleep in latest, probably because many people stay out later on Christmas Eve, often attending midnight Mass.”

A person in the United States on Christmas Day averages a decent wake-up time of 7:35 a.m., 50 minutes later than our average wakeup time on a typical day. Crucially, however, this dataset included everyone, not just parents. The best parent-specific data I could find was a survey of 2,000 parents, conducted by a mattress company in the UK, which found that the average child wakes up at 6:44 a.m. on Christmas Day. They even turned that data into a calculator, you can plug in your child’s age and location (within the UK) and it spits out your child’s likely wake up time. Why does a child in Scotland sleep 20 minutes later than a child in London? Who can say — but the calculator says it’s so.

When should you open presents?

Data aside, if you have kids who are up at dawn and begging to open presents, do you send them back to bed, or let them at it? Kimberly Hensel, a Seattle-area mother of a 6-year-old, 3-year-old, and 1-year-old, described a typical Christmas morning scene in her house: The oldest wakes up at 6 a.m., then excitedly wakes up both his siblings and his parents. “We open at 6:30-ish, and we’re exhausted because we stayed up putting some crazy together into the wee hours of the morning,” she says.

Exhausted parents can take heart that these early mornings won’t be a permanent fixture of the holiday. “Younger kids have earlier sleep/wake schedules to begin with, and the excitement of Christmas morning can give them an even bigger boost of morning energy,” says Lisa L. Lewis, author of The Sleep Deprived Teen. “But those early mornings won’t last forever. As kids hit adolescence, they naturally shift to a later schedule (for both bedtimes and wake time).” When her kids were younger, she took a middle-of-the-road approach: “When my son and daughter were younger, we had a ‘no waking Mom and Dad until 7 a.m.’ rule. We knew they were likely to wake before that, especially given the excitement of Christmas morning! We weren’t making them stay in their own bedrooms until then – they could go downstairs and look at the presents under the tree and the stockings – but they knew that opening presents (which happened as a family) wasn’t going to happen until the appointed hour.”

Lots of families seemed to have arrived at a similar approach, which differentiated stockings and one gift (sometimes a “Santa gift”) from the rest of the presents. Some parents allow stockings as fair game as soon as their kids are awake, while others had clear rules around not opening stockings, or anything else, until the parents were awake and at least somewhat caffeinated. Phased gift opening, where breakfast happened after a portion of gifts were opened is a common way to have a loose schedule for the day — but when that gift opening starts varied greatly from family to family.

What about the non-gift parts of Christmas?

A 2017 Pew Research survey found that 46% of people in the U.S. celebrate Christmas primarily as a religious holiday. Families with young kids who celebrate the religious aspect of the Christmas holiday had some thoughts about how to balance out the gift extravaganza. It’s common for churches to hold a service that’s particularly aimed at children on Christmas Eve. But some families do attend church on Christmas morning with children, though I didn’t talk to any who did so before the presents were opened. Stephanie Murray, who is Catholic and whose two children are both under 5, says that they open presents before attending church “because we don’t hate ourselves.” Tiffany Lawrence, a mom of elementary school aged kids in the southeast U.S. says that they begin Christmas morning the same way her family of origin did: “We take a moment to discuss our gratitude for Jesus’ birth and what he came to do in the world. Say a prayer of thanks, then let them tear into the gifts. Breakfast after.”

The bottom line on when to open gifts on Christmas

The ideal time to discuss your expectations for how Christmas morning will unfold is before small children are jumping on your bed when it’s still dark out. Even kids who normally sleep in can throw their schedule out the door on Christmas morning. Setting out whatever bright-line rules you want to follow in advance can make the morning at least a little less of a negotiation. No going into the present room without parents was a common rule; several parents endorsed the rule “kids don’t open presents until the coffee is ready.” Some parents had clear rules for “start time.” One said: “My kids are 10 and 6, and the rule is downstairs no earlier than 6:30.” Another said, “No going downstairs before you wake up mom and dad, and it can’t be before 7.” (An OK-to-wake clock might be a good option for kids who can’t yet tell time.)

But you don’t have to have rules; plenty of parents endorsed the “embrace the chaos” approach. One parent wrote “when they’re up, it’s present time.” Another said that if his kids were up at a ridiculous hour and begging to start opening, “I let them — as my parents did with me and my siblings. It was crazy and that was part of the fun. Now they sleep in later than me and I’m glad I let them when they were small.”

More Like This
The Best Travel Tips For Solo Parenting
Winter Travel Tips For Families
Tips to Beat Jet Lag, For You & Your Kids
30 Valentine's Day Knock Knock Jokes For Your Corny Crush
What Parents Are Talking About — Delivered Straight To Your Inbox

This article was originally published on Dec. 17, 2021