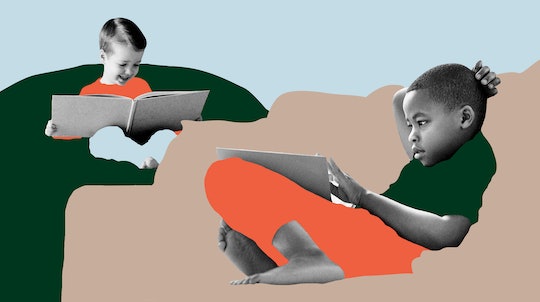 Where Are The Books That Show Different Ways To Be A Boy?

On my 8- and 10-year-old daughters’ summer reading lists this year were a number of critically important and beautiful books, from Brown Girl Dreaming to Herstory: 50 Women and Girls Who Shook Up the World. These books entertain kids and teach them about the impact of systemic racism, while chronicling the lives, struggles, and triumphs of women and girls who refused to be subservient or confined to the domestic sphere, as their gender roles have historically demanded.

We were so excited to read these stories. But as we go back to school this fall — in one form or another — I’d like to see something added to the curricula and reading lists: books that show different ways of being a boy.

I don’t mean books about boys who are adventurous or mischievous, like Percy Jackson or Robinson Crusoe. Those tales abound, and have for centuries. Instead, I mean books — and movies and other media — starring boys who rebel against the restrictive gender norms that they, too, have to navigate. An increasing number of picture books fill this void, but where is the media for older kids starring “feminine” boys? Where are the books about tween boys who love pink, glitter, unicorns, dresses, kindness, empathy, emotional connection and other “girl” items and traits that we now know are only as gendered as we make them?

Boys already so much freedom in those spaces, many of us assumed they were, well, free.

The need for such representation became clear to me during the last two years, as I worked on a book about the psychology, science, history, and future of tomboys — girls who don’t embrace traditional gender norms or roles, or who dress or act “like boys.” Over the last 40 years or so, educators, activists, and policy makers have rightly focused on helping girls overcome the cultural restrictions placed on them, and there have been many. Thanks to the feminist-fueled 1970s, Title IV passed, mandating equal funding for girls’ and boys’ educations and sports. Thanks to concerted efforts to encourage girls to pursue math and the sciences, they’ve made great gains in STEM fields, now often outperforming boys in these subjects.

Because boys already had so much freedom in those spaces, many of us assumed they were, well, free.

Not so. Their restrictions are just of a different sort. A 2018 report by Plan International, an NGO that advocates for children’s rights and gender equality, found that a third of American boys felt pressure to conform to traditional notions of masculinity. Some of these were positive — physical strength, strong leadership skills — but boys also felt encouraged to be violent, unemotional, and put down girls or talk about them sexually. The vast majority had heard other boys insulted when they were “acting like girls,” meaning crying or otherwise showing vulnerability. The boys understood such behavior to be, as the report put it, “implicitly unbecoming.”

Boys intuit these messages very early, and it’s tied to their cognitive development and how they learn to understand gender. In the process, they learn to devalue what’s marked as feminine.

Psychologists have detected a phenomenon in which girls who avidly wore princess garb abruptly dump it in honor of sportier clothes, and disavow pink and other culturally feminine items. They call it, very scientifically, the “pink-frilly-dress-to-tomboy phenomenon,” which occurs between 6 and 8 when kids understand “gender constancy”: the idea that their biological category of female isn’t dependent on what they wear or like. In one study, less than 40 percent of girls maintained stereotypically feminine interests as they aged.

But boys don’t go through this phase, turning 6 and declaring their love of pink sparkles and unicorns. Boys, in fact, become even less flexible and more ruled by stereotypes. That’s because most children begin to understand the gender hierarchy at this time: boys and boy stuff are more culturally valuable than girls and girl stuff. So both boys and girls reject what’s marked as feminine. For girls, that rejection equals internalized sexism. For boys, it’s the seed of toxic masculinity.

A century ago, children of both sexes had long hair and wore dresses; their biological sex was de-emphasized. But at the turn of the 20th-century, as more theories about homosexuality were developed, some began to believe that nurture, not nature, made boys gay. To ward off such a fate, parents were encouraged to dress boys as little men and give them toys like construction sets that promoted male gender roles — essentially, to prepare them to be straight guys when they grew up. Homophobia has powered much of the pressure on boys to not be feminine.

The problem is that so much good stuff is marked “feminine”: kindness, empathy, nurture, an interest in and skill at maintaining relationships. Over and over, psychological research finds that boys feel enormously constricted by what are considered “natural” or acceptable forms of masculinity, but we often confuse what is culturally encouraged and socially allowable with what’s biologically-inspired. Until there is real parity in how we raise and treat kids, and in the messages and media we transmit to them, we have no way of knowing.

We recognized a long time ago what kinds of images we needed to present to girls to free them from the binds of stereotypes. Tomboys were the heroines of lots of 19th century literature, from Capitola Black, star of what may have been the country’s first best seller, The Hidden Hand to Jo March. A friend recently asked me for a recommendation of a book starring a gender nonconforming girl. “Try Little Women,” I said.

But in many of those tomboy books, the male best friend is a “sissy” — there’s no positive masculine version of tomboy — whom the tomboy has to masculinize (though sometimes she, too, is feminized by the end, like Jo March and Capitola Black). Girls who act like boys are OK. But boys who act like girls? No way!

Those stories about radical girls? You can read them to and with your boys, letting them know that, in those pages, they might recognize themselves.

Meanwhile, girls are regularly expected to read books with male protagonists, but even school librarians sometimes assume that boys will not — and thus should not — be interested in books about girls, whether they’re rebels or not.

This is a crazy time for parents. Most of us are disappointed and/or furious about the state of our schools. But it’s also an opportunity. For kids learning remotely, away from the complicated social situations that in-person school presents, some gendered pressures are receding. We can use this time to show boys different models than they may have seen on the playground or in school stairwells. The series Stories for Boys Who Dare to Be Different: True Tales of Amazing Boys Who Changed the World without Killing Dragons is a great star, and friends have offered other suggestions, like Julien Is a Mermaid or It’s Brave to Be Kind. We can also have books starring feminine boys that aren’t just about their difference. Those boys, too, can have adventures, with nail polish, sweetness, and plenty of pink.

Meanwhile, those stories about radical girls? You can read them to and with your boys, letting them know that, in those pages, they might recognize themselves.

More Like This
The 55 Best Chapter Books For Kids At Every Age
13 Kid-Friendly Ghost Stories For Littles Ones
In Search Of New York City's Most Luxurious Birth Experience
Where To Buy School Uniforms, From Jumpers To Dress Socks