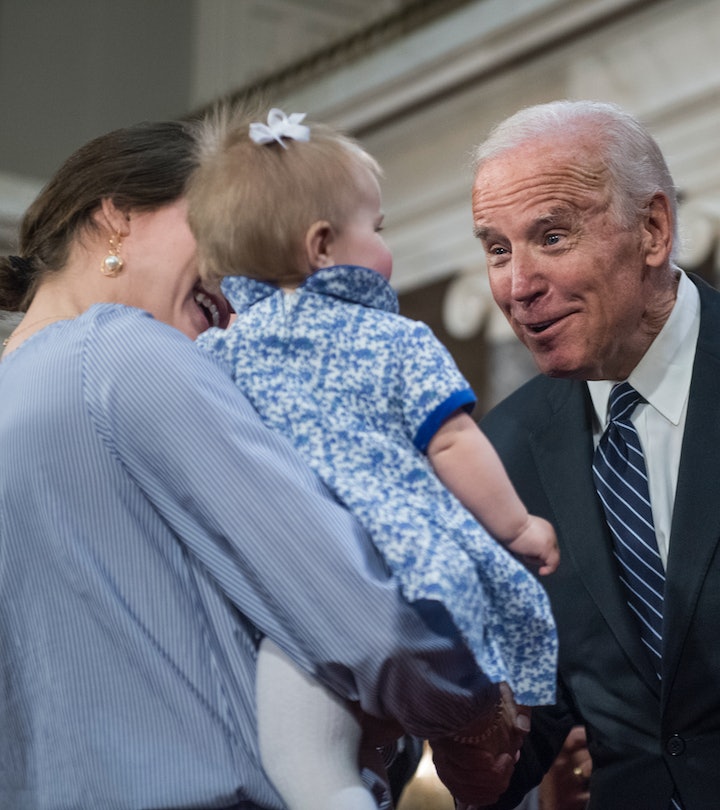 As a boss, Biden has stressed prioritizing family over work — and there's no reason to think his attitude will change once he's in the White House.

As coronavirus case numbers continue to rise and the shift toward remote work continues, the lines that once separated work and family time have all but disappeared for many working parents. And with the holidays fast approaching many may be feeling pressured to send a few emails as the kids open presents or even work through family celebrations altogether. Which is why President-elect Joe Biden’s past quotes about prioritizing family time are such an important reminder for working parents and part of why Biden will be a win for working families in and out of the White House.

Back in 2014, as the Thanksgiving holiday approached, then-Vice President Biden sent out a memo in which he laid out exactly what he expected of his staff over the holidays: don’t miss important family moments. “I would like to take a moment and make something clear to everyone,” NBC News quoted Biden as having written in the memo. “I do not expect nor do I want any of you to miss or sacrifice important family obligations for work.”

The then-vice president went on to stress this was a matter that was “very important” to him. “In fact, I will go so far as to say that if I find out that you are working with me while missing important family responsibilities, it will disappoint me greatly,” NBC News reported Biden wrote. “This has been an unwritten rule since my days in the Senate.”

While the memo went out ahead of the holiday season, Biden made it clear this was a year-round expectation that included birthdays, anniversaries, weddings, graduations, illness, religious ceremonies, and more.

A few years later, Biden was asked about the memo during an appearance on The Tonight Show with Jimmy Fallon. At the time, Biden explained the death of his first wife Neilia and their 1-year-old daughter had changed how he thought about quality family time. “In my generation, it was about quality time instead of quantity time,” Biden said. “There’s no such thing as quality time. Every important thing your child will say to you will be off script, as they say, will be at a time when you don’t expect it.”

During a 2016 appearance on "The Tonight Show With Jimmy Fallon," then-Vice President Joe Biden explained how the deaths of loved ones changed how he thought about work-life balance.

Biden went on to explain how, in the early 70s, he balanced a new job in the Senate with caring for his young sons, Beau and Hunter, as a single dad. “When I ran a second time, I had missed 14% of the votes the first time [in the Senate] and I ran against a good guy who had a very effective ad. He said, ‘would you hire someone who missed 14 days out of every 100 days?’” Biden said. “I went on the air and I said, ‘Look, you elect me again and I have a choice between a procedural vote or going to my kids’ parent-teacher meeting, I’m going to the parent-teacher meeting.”

“I felt if I can do that, I should not hold my staff to any different standard,” Biden said. “I don’t want anybody on my staff feeling an obligation to do something for me when there’s something that matters in the family. There’s nothing noble about it, I do it.”

A focus on prioritizing family — especially while still navigating a demanding career — could be a welcome reminder during the ongoing pandemic. Research published by the National Bureau of Economic Research in July showed people had begun working longer days as a result of the shift toward remote work, adding an average of 48.5 minutes to each workday.

But Biden’s past comments on the importance of making time for family aren’t the only suggestion his administration will help working parents. The president-elect has vowed to provide federally-funded paid leave through legislation centered around 12 weeks paid leave for all workers. In fact, the issue of paid leave is one that is uniquely personal for Biden, who along with losing his first wife and daughter in 1972, lost his son Beau to brain cancer in 2015.

“How do you choose between leaving the bedside of your dying son or daughter who doesn't want you to leave, who just want you to hang on, to go to work?” The Democrat & Chronicle reported Biden said while speaking at a rally in support of New York Gov. Andrew Cuomo’s 12-week paid family leave program in 2016. "Because if you don't go to work for a while, you might not be able to turn the lights on in that apartment or that house where that child is."