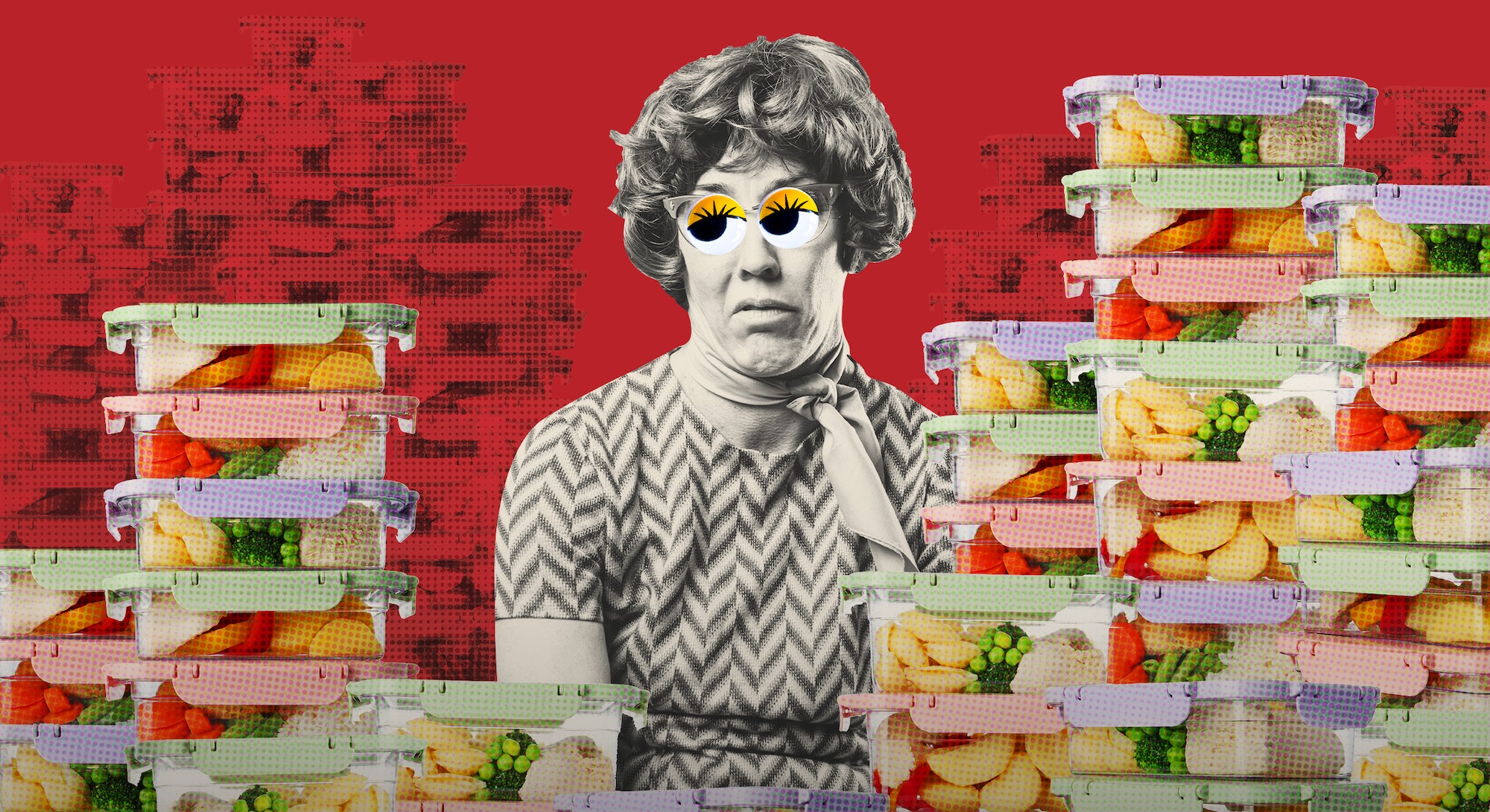 Meal Prep Sucks The Fun Out Of Food

Drastically cut meal prep time by... not doing it at all!

Like most millennials who learn how to parent via Instagram, I had come to believe that meal prepping and planning would make me a good mom. Blame my Virgo sun, productivity culture, or the patriarchy, but even before I had my two daughters in three years, I was already prone to the allure of smooth systems that promised efficiency. After adding the chaos of kids to the mix, I was desperate for a way to manage that most essential task: keeping them fed. In my mom-group chats and on social media, once-a-week meal prep and carefully planned menus were lauded as not just quicker, easier, healthier, but (or so it was implied) morally superior.

By investing a few dedicated hours in advance, the Meal Prep ethos goes, the partner responsible for the majority of the grocery shopping and cooking could put a wholesome dinner on the table every night of the week without mealtime scramble. (In straight couples, these preppers, as 2019 Pew Research shows, are still 80% women.) Not an effort, movement, or morsel wasted. Every fleeting moment maximized to its full potential. “Enjoy more time with your family!” I could hear the meal-preppers chant. “MAKE THE MOST OF THIS PRECIOUS TIME!”

“I know someone who has hardboiled eggs on a Thursday that she cooked on Sunday. It’s no way to live.”

How could I not? Dutifully, I got out all my mismatched containers with the missing lids. (Was I already a failure?) No matter, I brushed aside the thought, knowing that my wonky fleet would soon be stacked neatly in the fridge with all the components for a week of balanced meals. Instead of my typical method of deciding what to eat based on which produce was about to go bad, I readied my CSA haul to roast all at once on a sheet pan. For the first time, I made homemade granola as a snack. Then I relished the thought that I was the type of mother who made homemade granola as a snack. (This is all part of the process.)

As I spooned chia seed pudding in mason jars and boiled chicken breasts, I caught a glimpse of my 2-year-old on her iPad enjoying non-educational programming instead of PBS Kids, and I felt a flash of guilt. If I’d raised her in the Magda Gerber or Montessori method, I berated myself, she would be able to entertain herself for hours in her “yes” space with a single cup. Surely, I’d get it right the second time around: We were just about to start baby-led weaning with my 6-month-old, and I gave myself a pat on the back for preparing softened carrots and apple cubes in advance instead of reaching for a pouch or jar.

By Day Three, the rice was desiccated, and I was tired of the same flavor profile.

The morning after my meal-prep experiment, I self-righteously ate the granola with yogurt, but the toddler took one look and wisely opted for freezer waffles. At lunch, I saved my fellow WFH husband from his typical run for subs by pointing him to the roasted veggies and told him how we could combine them for grain bowls with already cooked brown rice today, roll them up for burritos tomorrow and have fajitas with any leftovers on the third. He generously pretended to be grateful despite his obvious desire for fast-casual, and I felt smug. When I got out the Tupperware, though, I saw the peppers and onions were congealed with olive oil, and had lost the flavorful crunch they’d had fresh out of the oven. Still, I soldiered on.

By Day Three, the rice was desiccated, and I was tired of the same flavor profile. In the mornings, the overnight oats fell off my spoon in my bowl with a disappointing plop, and I lost my appetite. (Maybe, since meal prep and planning has long been co-opted by diet culture, as writer Virginia Sole-Smith notes, that was the real point all along. After all, no one is talking about batch-prepping brownies even though they conveniently come by the dozen.)

During my foray into meal-planning culture, I discovered therapist and mental health advocate KC Davis, whose compassionate approach to managing household tasks absolves perfectionist parents and have earned her more than a million followers. Davis notes what you eat and how you make it is morally neutral. Her Struggle Care Cookbook goes on to say: “You are under no moral obligation to cook. The type of food one eats does not make one a better person or a worse person. Cooking out of guilt or perfectionism is not helpful.”

I tossed the remainder of the leftovers well before the end of the week and I did feel guilty for doing so. Meal prep not only led to more food waste, it had also robbed me of the pleasure of eating — and, in the most unforeseen consequence, that little bit of time to myself in the evenings that I’d typically spend cooking.

I decided to drop meal prep and stick to meal planning lite. Surely Taco Tuesday could work? Except on Tuesday, I didn’t want to eat tacos. I had a hankering for stir fry instead. Designating a specific food for the next day seemed as silly as laying out your clothes the night before: How did you know what you were going to feel like in the morning?

I found I didn’t want or need to chop the time I spent preparing meals for my family, and that the only part I liked about meal planning was the illusion of control.

When I confessed my sins to a circle of trusted moms, I expected recommendations for apps, meal-planning calendars from La Paperie, or general “What My Toddler Ate in a Day”-style advice. Instead what I found was a secret stash of meal-prep haters. I discovered magical friends who make kid food at 6 p.m., then sit down to a nice meal among adults post-bedtime. Another admitted everyone in the house eats a separate thing at a separate time. Others still subscribe to meal-plan kits where the perfectly pre-chopped portions for babies and toddlers arrive on your doorstep.

For my friends who actually enjoy eating instead of looking for the quickest way to shove nutrients down your gullet, meal prep got no love.

“I know someone who has hardboiled eggs on a Thursday that she cooked on Sunday,” one whispered. “It’s no way to live.”

For me, I found I didn’t want or need to chop the time I spent preparing meals for my family, and that the only part I liked about meal planning was the illusion of control. I figured I was already trying to Turducken a hobby into a domestic task. I didn’t also need to boil it down to its barest component parts until it lost all semblance of pleasure.

Of course, the cook in every family knows that making dinner buys time off from child care (and dishes). I hear my 2-year-old whisper “Welcome to my pom pom store” as she upends a craft kit on the table just before I pop my headphones in to listen to a podcast as I peel vegetables for soup. I step out to the yard to hunt for sprigs of rosemary and thyme in my long-neglected garden beds.

The creative triumph of making something appetizing out of odds and ends (I substituted Goldfish crackers for breadcrumbs in a recent meatball recipe) gives me a hit of dopamine, whether or not my toddler will actually partake. We try to get her to try a bite before she says she doesn’t like it, although she usually sticks with her first assessment. I prefer her finding her own taste instead of eating on autopilot.

We now have an emergency stash of microwavable chicken nuggets in the freezer, and it brings me great comfort to know they’ll be there, ready and waiting, when we need them. How’s that for a meal plan?