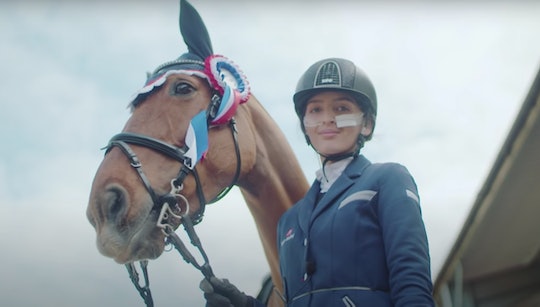 Evie Toombes argued that had her mother’s doctor properly advised her on the importance of taking folic acid while trying to conceive, her mother would have delayed her pregnancy.

A British woman living with a rare form of spina bifida has won a major legal case against the doctor her mother consulted prior to her conception. In the case, 20-year-old para showjumper Evie Toombes alleged that her mother’s general practitioner gave negligent advice regarding the importance of taking folic acid supplements before becoming pregnant. On Wednesday, a judge awarded Toombes the right to compensation based on her claim that had her mother been properly advised, she would have waited to conceive and would have therefore given birth to a “healthy child.”

Toombes’ mother is said to have sought advice about getting pregnant from Dr. Philip Mitchell in February 2001. According to a statement from Toombes’ lawyer, Susan Rodway, Toombes’ mother Caroline asked about the steps she should take before trying to become pregnant and specifically raised the issue of folic acid and whether she should wait to conceive after having just stopped taking the contraceptive pill.

Since 1992, public health agencies like the U.S. Centers for Disease Control and Prevention (CDC) have recommended that all women of reproductive age take 400 micrograms of folic acid every day in addition to consuming foods with folate in order to help prevent neural tube defects like spina bifida. Yet, according to Toombes’ lawyer, Mitchell did not tell Toombes’ mother about the known relationship between folic acid supplements and the prevention of neural tube defects. Instead, Toombes’ mother alleged Mitchell told her that folic acid supplements were “not necessary” if she had a good diet and that she should go and begin having “lots of sex.”

Toombes was conceived almost immediately and born with spina bifida nine months later on Nov. 19, 2001. According to court documents, Toombes was diagnosed with lipomyelomeningocele, a condition associated with spina bifida in which a fatty mass located in the spinal canal extends through an opening in the vertebrae to become visible under the skin on the back. As a result of the condition, Toombes reportedly underwent spinal cord untethering at the age of 16 months. Now 20, she suffers from impaired mobility and is an occasional wheelchair or walking frame user who is fed via a nasogastric tube, court documents revealed.

In response to Toombes’ allegations, Mitchell argued her mother was likely already pregnant at the time of her appointment on Feb. 27, 2001. According to court documents, Mitchell admitted he had no recollection of the appointment but has maintained the argument that any guidance he gave would have been in accordance with the recommended guidance of the time.

According to Toombes’ lawyer, notes Mitchell took during the appointment noted only “folate if desired” in regards to folic acid supplements.

“The inadequacy of the note was clearly important,” Rodway wrote in a statement issued Wednesday. “The Court rejected Dr. Mitchell’s evidence that he provided advice in accordance with the recommendations at the time (all of which referred to folic acid supplements taken before becoming pregnant) and found that had proper advice been provided the Claimant’s mother would have delayed conception for about a month whilst taking the supplement. This would have led to a later conception of a normal, healthy child.”

The ruling in Toombes’ case is particularly remarkable as it could open the door for doctors being held liable for children born with birth defects. “The ground-breaking ruling means that a healthcare professional can now be found liable for negligent pre-conception advice which results in the birth of a child with a serious health condition,” Rodway said.