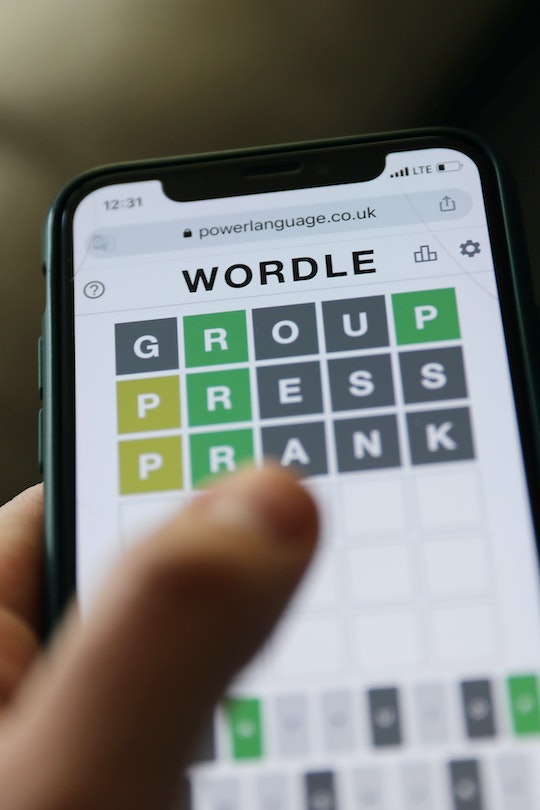 Let Us Now Praise Wordle, Which Asks Very Little Of Us

Something that won’t fall apart if I forget about it for 23 hours and 50 minutes a day? Yes.

Hello, my name is Jamie, and I am one of those annoying Wordle people. Every morning — after I shuttle my children off to school and before I sit down to work — I make myself a cup of coffee, scroll through Twitter and, within a minute, see someone in my feed has posted their results. Those black, yellow, and green squares do to me what a bell did to Pavlov’s dogs. I perk up, I (mentally) salivate. I say, “Oh right! Time for Wordle!”

For the uninitiated, Wordle is a daily word puzzle game. It’s not an app. As in Internet Days of Yore, you have to go to the Wordle website — a sparely designed space free of flashy animated ads or literally anything but the puzzle itself. The premise is fairly simple:

“Guess the WORDLE in 6 tries,” reads the prompt players receive during their first game. “Each guess must be a valid 5 letter word. Hit the enter button to submit. After each guess, the color of the tiles will change to show how close your guess was to the word.”

In one to six tries, you’ve either guessed the Wordle or not. Once you have (or have failed) your statistics pop up: how many tries it took you, how you do generally, your winning streak, etc., with the option to share them.

And that’s it until tomorrow.

No new puzzle generates to keep you clicking. No “upgrade” feature to “unlock” new games. No ads. None of the trappings of so much of the internet, which earns money by keeping you clicking for as long as possible. There’s nothing to keep you from moving on with the rest of your busy day. And, according to a recent interview in the New York Times , that’s how creator Josh Wardle likes it. (Yes, the title of the game is a pun, which frankly adds to my healthy obsession)

“It’s something that encourages you to spend three minutes a day,” he told the Times. “And that’s it. Like, it doesn’t want any more of your time than that.”

As an over-scheduled, in-demand woman, wife, friend, and mother: this speaks to me. Because I need fewer demands and more simple pleasures. I appreciate the small joy of a little morning ritual that isn’t mindless, but is low-stakes in pretty much every way possible. Something that won’t chew up my productivity or cost money. Something that speaks to my mom problem solving skills without taxing me emotionally — if I can figure out how to coordinate the needs of two children, a job, and a household, I can figure out what letter comes between that “O” and “L.”

Something that won’t fall apart if I forget about it for 23 hours and 50 minutes a day.

It’s a nice change of pace from a lot of my day, is what I’m saying. But, of course, now that it’s reached a certain popularity threshold, we already have the Cranky Online people who have to complain about Wordle. (Because this is the Internet and none of us are allowed to have nice things ever.)

“Uuuuugh! It’s all over my feed!” wail the naysayers. “All I see is pictures of green, black and yellow squares! Why do people post their Wordle scores every day? It’s so dumb.”

I might get self conscious about these complaints, except that they are most often coming from the same people who complain about seeing basically anything.

“Why do people post so many pictures of their kids?”

I have several questions in response: “Why do you care?” “Is someone forcing you to interact with these posts in any way? Blink twice if yes.” and “If you hate all these things so much why are you even on social media? Because it sounds like you just hate social media.”

We’re social, playful creatures: of course we’re going to share scores. It’s fun to talk about the game — how hard it was, how lucky we got, what strategies have helped us guess or get better. It’s also a fun and informative way to see which of our friends are witches.

Romper Lifestyle Editor and actual witch Samantha Darby, who when accused of sorcery didn’t even deny it.

It’s only a matter of time before some of these folks submit their barrage of hot takes claiming “Wordle is pRobLEMaTiC aCTUalLy,” which in turn, will spur on a day’s worth of discourse on Twitter. ( I’m drumming my fingers on my desk in weary anticipation of that one.)

But, until then, I look forward to tomorrow morning, when I remember, “Oh yeah! It’s time for Wordle.”

More Like This
Little Miss Memes That Speak To Our Mom Souls...
Don’t Like The New Instagram? Well There Might Be (Some) Hope
LEGO Unveils New 'The Office' Playset That Even Features Dwight's Stapler In Jell-O
Dr. Jill Biden Just Delivered Some Frank, But Powerful, Advice On Motherhood