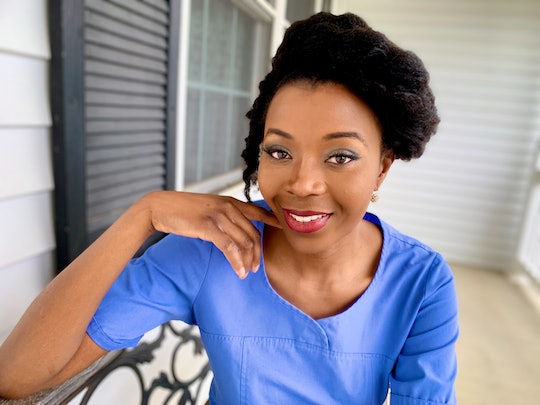 Doc McStuffins is a 6-year-old girl who has a diagnosis for every toy and stuffed animal in need. She’s a Black girl with ambitions of being a doctor — and an amazing animated role model. The response to a recent tweet by a young, Black female doctor illustrates why McStuffins is such an important representation for Black girls everywhere.

Recently, Dr. Bernice Fokum, M.D., an emergency medicine resident physician and policy school graduate at Harvard Kennedy School, took to Twitter to share about a very special patient she cared for at a hospital in Chicago. “My patient, an adorable little black girl with a poof on her head, was crying inconsolably and couldn't open her eyes,” she wrote. “Her guardian looked at me then told her, ‘ooh you're gonna love this doctor. She looks just like your favorite Doc McStuffins!’ And then she stopped crying.”

Fokum, a Black doctor, shares striking similarities to Doc McStuffins, as evidenced by a photo the new doctor shared of herself holding a doll of the cartoon doctor at her white coat ceremony. What’s special about that goes beyond appearances. Only about two percent of all physicians are Black women.

Though Fokum tells Romper she's been fortunate to come from a "legacy of dynamic, boss lady women," including her aunts and her mom who is an epidemiologist, she says didn’t really see any Black female physicians growing up. She was sold on becoming a physician after attending a summer program for underrepresented minorities in STEM.

It’s extremely important to have people who can represent the experiences of the people they’re serving.

“Outside of that, in my own life, I had not been treated by Black women or really Black physicians at all, so I was extremely motivated by the dearth of representation that I had had in my life in seeing black physicians,” she says. And that lack of representation in medicine often has dire consequences. Stereotypes about Black women coupled with racist beliefs that have persisted in the medical system — such as that Black people feel less pain — can lead to subpar medical care for Black female patients. Fokum cites racial health disparities, such as the maternal and fetal mortality disparities and medical abuses against Black people (like the Tuskegee Study), as just a few of those consequences.

“It’s extremely important to have people who can represent the experiences of the people they’re serving,” she says. “And that includes Black people, who have experienced racism and all that comes with it. The fact that only between five and six percent of all physicians are Black, and only two to three percent are Black women, it's devastating. Now more than ever, I think it's being recognized.”

Still, the systemic barriers and the implicit bias in medicine are not well discussed. One response to Fokum’s tweet highlighted that well. “Hi can I ask why you feel so strongly about your children going to black professionals? I have nothing against them as people but for me it's most important to find hard working dentists and doctors that fit my needs and I trust regardless of whatever ethnicity they are,” asked a Twitter user whose description says they’re a pediatric dentist.

The pandemic is disproportionally affecting people and children of color. A June 2020 study in the New York Medical Journal found “evidence in the COVID-19 pandemic that unconscious bias by white physicians may be contributing substantially to the disparities seen in clinical outcomes by Blacks,” and that the “absence of Black physicians has likely led to more deaths and disability that will persist long after the pandemic recedes.” Black doctors like Fokum, who became an emergency medical doctor at the early peak of the pandemic, are more than a comfort to children who can see themselves in the Black doctors who care for them. Black doctors help save Black lives.

When Black children see Black doctors, they also see something to aspire to. Mothers of Black children cheered Fokum’s tweet. “Did this to my daughter when we went to see a black optometrist and she was so happy! Seeing women who look like her in a positive setting is everything,” one mama said. “Yes!! We travel 45 minutes to our dentist outside of Providence so my sons have a Black dentist. We have a Black psychologist, and a BIOOC pediatrician and optometrist. We moved from Maine to RI primarily because #RepresentationMatters,” said another.

Women, especially Black and Hispanic women, are less likely to start or complete science degrees, leading to the underrepresentation of Black and Hispanic women in science-related fields. Exposure to a cartoon, like Doc McStuffins, showcasing a Black girl outside of the stereotypically negative portrayals of Black girls in the media can influence girls’ attitudes about who they are and what they can be. So when they meet a real-life Doc McStuffins, a role Fokum says she’s happy to fill, it’s powerful.

“If you don’t see other people who look like you who’ve gone through the throes of whether it be poverty, sexism, or racism and are still able to go on and live extremely purposeful lives, it’s incredibly difficult to be what you don’t see — to see the possibilities for yourself,” says Fokum. “Any time a Black child is my patient, I make it a point to be like, ‘It could be you next. We need you.’”

More Like This
Elmo Talks About Getting His Covid Vaccine In A Cute New Video
'Caillou' Is Officially Getting A CGI Reboot Whether People Like It Or Not
You Can Schedule Your Kid’s Covid Vaccine Appointment At Walmart
Should Parents Consider Delaying Covid Vaccines Until Closer To School Starting?