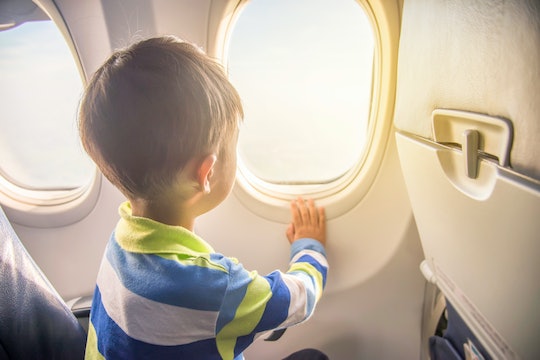 Do Kids Need A REAL ID? Here's What Parents Need To Know

Including what the new deadline for travelers.

The standard-issue driver's license many of us have tucked away inside our wallets right now soon won't be enough to get you on a domestic flight. Beginning May 7, 2025 anyone seeking to fly within the United States or access any type of federal facility will have to have a REAL ID-compliant driver's license, passport, or military ID. But do kids need a REAL ID? Here's what parents and guardians need to know about upcoming changes to federal identification standards and flying with kids.

Do minors need to have a REAL ID?

Children under the age of 18 are not required to provide identification when traveling with an adult companion within the United States, according to the Department of Homeland Security. Meaning that although no one over the age of 18 will be able to board a domestic flight without one form of accepted identification (such as a passport or the new REAL ID) , children won't need to have a REAL ID. The adult companion traveling with the minor, however, absolutely will have to possess a REAL ID or other form of accepted identification, according to both the Department of Homeland Security and Transportation Security Administration (TSA).

“Travelers age 18 and over must show valid identification at airport checkpoints in order to travel,” a spokesperson from TSA tells Romper. “Travelers younger than 18 do not need to show identification. This extends to beyond the ... deadline for REAL ID.”

The deadline has been extended... again.

The REAL ID Act passed by Congress in 2005 established new security standards for license and identification card issuance. While airlines and TSA have long accepted state-issued driver's licenses or other photo identification cards for travel within the United States, the Real ID Act prohibits federal agencies (including TSA and the Department of Homeland Security) from accepting driver's licenses and identification cards that fail to meet the minimum security standards laid out in the law once the law goes into effect. However, that deadline has been pushed a number of times, most recently from May 3, 2023 to May 7, 2025. The first deadline was set for 2008.

“DHS continues to work closely with U.S. states, the District of Columbia, and the U.S. territories to meet REAL ID requirements,” said Secretary of Homeland Security Alejandro N. Mayorkas in a statement. “This extension will give states needed time to ensure their residents can obtain a REAL ID-compliant license or identification card. DHS will also use this time to implement innovations to make the process more efficient and accessible. We will continue to ensure that the American public can travel safely.” Mayorkas went on to clarify that the pandemic was in part responsible for the additional delay: people were unable to renew or obtain compliant driver’s licenses and some state departments of motor vehicles (DMV) are still handling the backlog that was created.

Will any other forms of ID be accepted?

Parents who are worried about having the proper form of identification required to travel with their children within the United States beginning May 2025 may not need to rush out and secure a REAL ID right away. If you already have a valid U.S. passport or passport card, you're good to fly, according to the Department of Homeland Security. Other forms of accepted identification include foreign-government issued passports, permanent resident cards, and a Department of Homeland Security trusted traveler cards to name only a few. The full list of accepted forms of identification is here and worth checking.

Additionally, it’s worth noting that while a passport can take the place of a REAL ID when flying domestically, a REAL ID can’t replace a passport. Not for children. Not for adults. That means that children traveling internationally will still be required to have a passport after the REAL ID requirements become law in 2025.

Of course, even if you already have a valid passport, there's no harm in obtaining a REAL ID ahead of the May 2025 deadline. But before rushing out, check with your state's DMV office or other licensing agency to make sure you have everything you need to obtain a Real ID compliant license. Check your state’s DMV website or this interactive map on DHS.gov. At minimum, you will be required to provide documentation that shows your full legal name, date of birth, social security number, proof of address, and lawful status. That being said, states may set additional requirements.

While parents can breathe a sigh of relief when it comes to their children and the new REAL ID requirements, it may be smart to obtain a REAL-ID compliant form of identification for yourself as soon as possible to make clearing TSA checkpoints with your kids a breeze in the coming years.

More Like This
Princess Tiana’s Dream Restaurant Is Becoming A Reality At Disneyland
Reddit Backs Mom Who Got Scolded By Teacher For Not Inviting 30 Kids To Birthday Party
Freeze! The Single From The New 'Bluey' Album Just Dropped
The President Of Ireland Wants To Get Rid Of Homework & Honestly, He's Onto Something
What Parents Are Talking About — Delivered Straight To Your Inbox

This article was originally published on Oct. 2, 2019