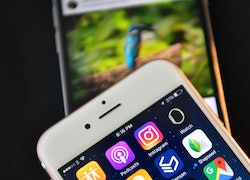 Instead of taking a screenshot of a meme that made you chuckle, remember that Instagram lets you save those photos and videos you know you’ll probably want to see again. It’s the perfect feature for those who have gotten so far into the explore page and know they won’t be able to find that hilarious celeb video or delicious recipe again. But, let's say, you find yourself 112 weeks or so deep into someone’s photos, will that certain someone be alerted if you save their Instagram photo or video? Fortunately, this feature makes it so you never have to take a screenshot again.

Indeed, Instagrammers are in luck because the app has a feature that allows you to privately save posts for later visiting. In the app, you’ll see a bookmark tab underneath posts in your feed, which will be on the bottom right corner. So if you decide you’d like to save the post, simply tap it and it will be added to a private space on your profile.

When you decide you want to revisit the post, tap the profile icon on the bottom right corner of the app and from there you will be able to see all of the posts you’ve saved, which are only visible to you and no one will be notified that you’ve saved them, according to Instagram.

And if you plan on saving a bunch of posts, Instagram also lets you put them into "collections" to help organize the photos and videos you've saved. To make a collection, you simply go to your profile and tap the three horizontal lines. Then, tap the bookmark icon to access your "saved" posts. Once there, tap the "+" in the top right corner and then enter a clever name for your collection. Hit next, and voila, you're done.

"When you stumble upon a funny video you want to remember, a new outfit you like or even inspiration for an upcoming vacation, you can now keep track of favorite posts right from your profile," Instagram wrote in an announcement when the feature first rolled out way back in 2016. "When you save someone's post, they're not able to tell that you've saved it."

Until the social media platform unveiled this feature — a concept similar to Pinterest, the content sharing site that allows members to "pin" images and videos — Mashable reported that many of its users had to either screenshot posts or send them to themselves to revisit the photos and videos they wanted to see again.

"One of the awesome things that our community is doing is discovering a lot of things particularly around interest-based inspiration whether that's food, fashion or beauty," Instagram product manager Ashley Yuki told Mashable. She added that saving posts "can often be a very personal experience," so it will be a private feature for the time being. But, of course, with all social media apps in the tech world, that is subject to change.

So, at the moment, Instagram users are free to save any and all posts they'd like and no one will be notified that you may have been looking at your best friend's ex's weddings photos, clever pregnancy reveal announcements, or just that amazing DIY project you can't wait to try when you finally have some free time. Whatever the reason, you're able to save those posts privately.

This article was originally published on Dec. 18, 2016