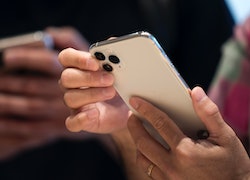 If You Want AirPods For Your New iPhone, Set Aside A Little Extra Cash

Here's what you should expect if you're considering buying the iPhone 11.

Apple recently unveiled its newest model of the iPhone — iPhone 11 — and it comes with plenty of new features, of course. While many are likely excited to upgrade, they understandably might have some questions about the new model. For example, does the iPhone 11 come with AirPods? Here's what you should expect if you're considering buying a new iPhone.

Apple AirPods are the current must-buy when it comes to teenagers, tech lovers, and people on the go, as Vox explained. People love that they're sleek, simple, hands free, and look like the upgraded version of Apple's EarPods. So, it's understandable why people would hope that the new iPhone comes with them.

The iPhone 11, iPhone 11 Pro, and iPhone 11 Pro Max boast faster speeds, improved battery life, and an incredible camera to make any Instagram user jealous, according to CNET. However, the iPhone 11 does not come with AirPods. Instead, the iPhone 11 comes with a brand new charger and EarPods with a lightning connector in the box, according to Apple. AirPods have to be purchased separately at an added cost.

AirPods come in two different models — one with a wireless charging case (which charges through a charging mat) for $199, or with a regular case for $159. People who are looking to purchase the wireless headphones can purchase them directly from Apple, or through a third party retailer like Amazon, which is currently selling both models for a discounted price. When it comes time to purchasing AirPods, people might want to act fast. AirPods sold out everywhere earlier this year after growing in popularity, according to BuzzFeed News. And it's very likely that they will sell out once people start buying them for presents around the holiday season.

It isn't a surprise why users would expect to see AirPods in the box with their new iPhone 11. Apple removed the headphone jack from new iPhone models in 2016 with the introduction of the iPhone 7, according to Fast Company. From there, Apple began including their EarPods with a lightning connector with the phones. These headphones are Apple's standard model and come with a cord that plugs in to the charging input on the iPhone. But this also makes it impossible for users to simultaneously charge their phone and listen to music (and is especially inconvenient at the airport), according to The Verge.

But with AirPods, users can charge their phone and listen to music, hands free. When AirPods were first introduced into the world by Apple in 2016, they were labeled as "innovative" and a new technology that would change the way that people listen to music and make phone calls. And while they haven't necessarily changed the world, they have made it easier for people to listen to music on their morning commute without having to hold their phone, which is a plus.

AirPods aren't the only wireless option. There are some fantastic wireless earbuds on the market that get the job done, according to Forbes, but just aren't made by Apple. So, iPhone users can have plenty of options when it comes time to picking the perfect pair of wireless headphones for them. But a pair Apple AirPods definitely won't be included with your new iPhone 11.