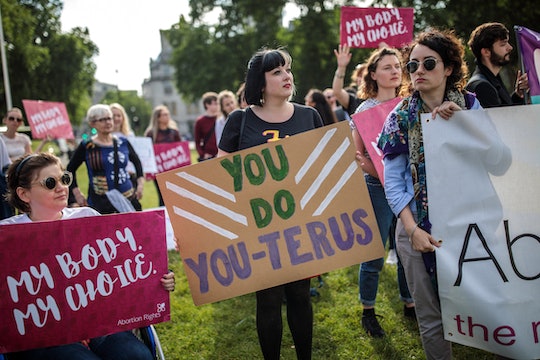 If You're Enraged By Extreme Abortion Legislation, Here's How To Fight It

By now, your news notifications may look like a timeline of abortion ban updates from different states. Indeed, as many as eight states have passed legislation restricting access to abortion care just this year, and several more have introduced measures to ban the medical procedure as early as six weeks into pregnancy. Called the “heartbeat bill,” this kind of legislation has already been passed in many states and Alabama has passed the nation's most restrictive abortion ban. With such extreme legislation sweeping the nation, you might be wondering how to protest these abortion bans.

Alabama’s recent passage of the nation's most restrictive abortion law has sparked outrage among feminists, civil rights activists, and much of the public for its near-total ban that will also be applied to impregnated victims of rape or incest, according to The New York Times. In response, hundreds of demonstrators already marched the streets to the Alabama Capitol this Sunday, according to NBC News. Not only that, but many organizations have also already begun pursuing legal challenges to the restrictive legislation that many say threaten the historic Supreme Court precedent set by Roe v. Wade.

Like many others, if these bans enrage you, but don’t know how to go about protesting, worry not. There are many additional ways you can protest the bans, from marching the streets yourself to contributing to the cause from your desktop.