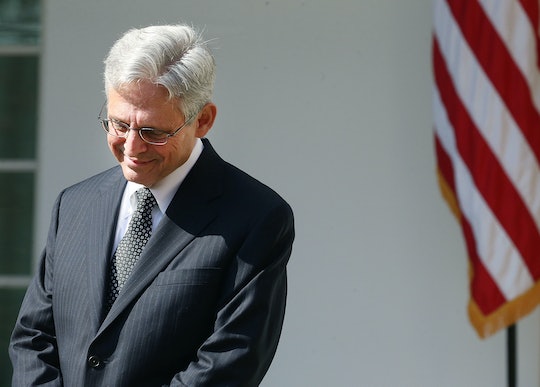 Merrick Garland’s children are back in the national spotlight once again after the Senate confirmed the onetime Supreme Court nominee as attorney general. So who are Merrick Garland's kids? The truth is, not a whole lot is known about Rebecca and Jessica Garland. What we do know, however, is that they're two fearless, accomplished women whom their dad obviously adores.

Garland joked about the difficulties of raising adventurous daughters in March 2016, after being nominated to the Supreme Court by then-President Barack Obama. Speaking from the White House Rose Garden shortly after his nomination was announced, Garland revealed his eldest daughter Rebecca, who was not in attendance, was in for quite a surprise. According to Garland, Rebecca was had been off the grid so to speak, hiking in an area without cell phone reception, and thus had no idea about her father’s nomination.

“I also wish that we hadn’t taught my older daughter to be so adventurous that she would be hiking in the mountains out of cell service range when the president called,” Garland joked.

The idea that even someone as influential as a Supreme Court nominee might have trouble getting in touch with his adult children on one of the most important days of his life gave the crowd quite a chuckle. It also told people everything they needed to know about the love Garland has for his daughters.

Beyond knowing she loves a good long hike in a remote locale, we know Rebecca graduated from Yale in 2013. According to her LinkedIn page, Rebecca graduated cum laude with a bachelor's degree in psychology after attending the uber exclusive Sidwell Friends in Bethesda, a pre-K-12 school that the Obama daughters also attended. In 2018, Rebecca reportedly received an M.B.A. from Harvard, married Alexander Newman Tanner, and began a job as a dialysis clinic manager for DaVita, according to The New York Times. She’s since been promoted to regional operations director at DaVita. Previously she worked as a pharmaceuticals consultant with Trinity Partners.

Rebecca’s younger sister, Jessica, is also a Yale graduate, having earned a B.A. in Ethics, Politics, and Economics in 2015, according to Bustle. During her time at Yale, Jessica served as co-president of the Yale Undergraduate Prison Project, a student-run social justice advocacy group that looks to combat inequities within the criminal justice system. She joined fellow Prison Project member Nia Holston to discuss the program in a 2014 interview with Yale Daily News. Through the Prison Project, Jessica also testified in support of a Connecticut bill aimed at tweaking the state’s sentencing recommendations for juveniles.

In 2016, Heavy reported that Jessica, who unlike Rebecca was able to see her father thank Obama for his Supreme Court nomination in person, was pursuing a graduate degree at Cambridge.

While we don't know much about the Garland ladies, it's easy to see they're two highly educated women who are pretty fearless. And, their dad, who will now head the Justice Department under President Joe Biden, obviously adores them.

More Like This
Meghan Markle Calls On Men "To Be Vocal" In The Aftermath Of Roe v. Wade Ending
AAP Says Kids Will Face "Grave Consequences" Now That Roe V. Wade Is Overturned
Robb Elementary School Is Set To Be Demolished After Deadly Shooting
Can States Ban The Abortion Pill? FDA Rules May Make That Hard

This article was originally published on March 16, 2016