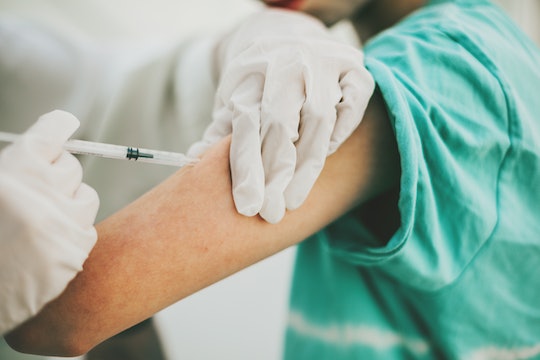 Despite CDC Warnings, 1 In 3 Parents Won't Vaccinate Their Kids Against The Flu

Despite health experts fervent warnings about the ongoing coronavirus pandemic colliding with flu season to form a potential "twindemic" this fall, many parents won't vaccinate their kids against the flu this year. In fact, one in three parents has no plans to have their children receive a flu shot, according to a nationwide poll from C.S. Mott Children's Hospital.

While two-thirds of parents surveyed said they intended to get their child a flu vaccine this year, one third said they planned to skip it despite health expert's advice, C.S. Mott Children's Hospital reported finding in its National Poll on Children's Health. Additionally, the poll, which was conducted in August by by Ipsos Public Affairs, found that only one third of parents believed it was more important for children to get a flu vaccine this year compared to other years.

Both the World Health Organization (WHO) and the U.S. Centers for Disease Control and Prevention (CDC) have stressed that obtaining a flu vaccine is more important than ever this year as hospitals and health systems could easily become overwhelmed when the seasonal flu and the ongoing coronavirus pandemic overlap in a "twindemic."

"This fall, before the seasonal circulation of influenza increase, I encourage the American people to be prepared and to embrace flu vaccination with confidence for yourself, your families in the communities," CDC Director Robert Redfield said in June, as CNN reported. "This single act will save lives."

The National Poll on Children's Health found that 8% of parents surveyed believed it was less important for their child to obtain a flu shot this year while 58% thought it was no more but no less important. Not surprisingly, the poll also found that parents who felt the flu shot was more important this year than any other year were more likely to report having plans to get their child vaccinated.

Among the 32% of parents who said they were unlikely to get their child a flu shot this year, 40% said they did not believe the flu vaccine was necessary while 32% said they did not think the vaccine was effective and 42% cited concerns about the vaccine's side effects. Some 14% of parents unlikely to vaccinate their child against the flu this year said it was because they were keeping their children away from health care settings due to concerns about COVID-19.

But some parents may not have much of a choice this year as some states are considering making flu shots mandatory for kids attending public schools or child care. In August, Massachusetts became the first state to mandate flu shots for kids in child care and school. Under the new law, children age 6 months or older who attend child care, pre-school, kindergarten, or K-12 school in Massachusetts are required to have received a flu vaccine or submitted a medical or religious exemption by Dec. 31. Homeschooled children are not required to obtain a vaccination. Additionally, lawmakers in New Jersey and Vermont have since said they are considering similar legislation.

Whether a pediatric flu vaccine is mandatory or not, researchers behind the Mott Poll have said their findings indicate health experts and health care providers need to seek new avenues for disseminating information about the flu vaccine's importance. "A key challenge for public health officials is how to reach parents who do not routinely seek seasonal flu vaccination for their child," Mott Poll co-director Sarah Clark said in a statement released by the hospital. "When getting a yearly flu vaccine is not a pattern, parents need to be prompted to think about why it's essential for their child to get vaccinated."

More Like This
Banana Boat Sunscreen Has Recalled Products That Were Found To Contain Benzene
New York Can End Religious Exemptions to Vaccine Mandates, Says A Federal Appeals Court
Everything Parents Need To Know About Monkeypox
How To Avoid & Treat Lyme Disease