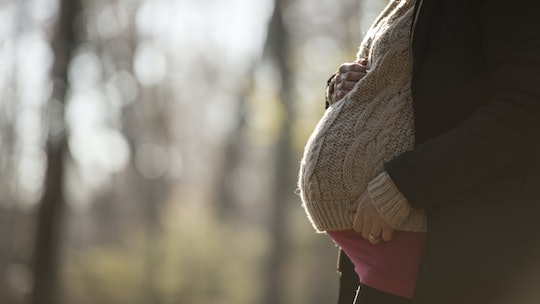 1 In 4 Pregnant Women Suffer From Mental Health Issues, But Experts Say This Can Help

Sometimes, it can seem like every media depiction of pregnancy portrays a completely joyful experience. Couples who want kids in TV ads or in movies are always blissfully happy when they find out they are expecting. But the reality is, it's no walk in the park for a lot of women for an array of reasons. In fact, as one new study out of the United Kingdom has found, one in four women struggle with mental health issues during pregnancy, with 11 percent of them dealing with serious issues like depression. That's the bad news, but the good news is, researchers have a pretty simple solution to try to combat the issue, and it's one every medical professional working with pregnant women should be aware of.

Researchers at King’s College London worked on this study by recruiting 545 pregnant women attending their prenatal appointments between November 2014 to June 2016, according to The Independent. So the results of the study are from really recent cases. Apparently, during their checkups, midwives asked the pregnant women a set of questions about their mood, which the outlet reported has been found to be really effective when it comes to identifying mental health issues.

And unfortunately, the results of the study included some upsetting numbers. As previously mentioned, the study found that one in four women questioned in the study reported mental health issues during pregnancy: 11 percent of them suffered from depression while 15 percent struggled with anxiety. In addition, 2 percent struggled with eating disorders, and another 2 percent had obsessive-compulsive disorders. Many of the women were actually dealing with multiple issues, the study found.

The results show mental health issues are more common than previously thought, according to iNews. But it also discovered that asking simple questions can help in identifying the problems the pregnant women reported.

Louise Howard, the author of the report and a professor at King’s College London, said of the findings, according to iNews:

In clinical practice, maternity professionals need to identify whether or not a woman has any mental disorder, not only mood disorders which until recently have been the main focus of concern. ... This study supports the NICE recommendation that women should be asked, by a non-judgmental and supportive health professional, at all contacts in pregnancy and after birth about their emotional well-being and are given the opportunity to respond to these structured questions.

So the researchers feel one solution to this issue is actually super simple: just talk to women about how they're feeling during their pregnancy, and identify if there are any underlying mental health issues that need to be treated. Doesn't seem like a ridiculous suggestion, right?

The NICE recommendation Howard spoke of is likely referring to the National Institute for Health and Care Excellence's antenatal and postnatal mental health guidelines. Under "depression and anxiety disorders," the guidelines notes that during a woman's first contact with primary care or during her booking visit, and during her early postnatal period, health care professionals should consider asking:

During the past month, have you often been bothered by feeling down, depressed or hopeless?

During the past month, have you often been bothered by having little interest or pleasure in doing things?

The questions are meant to be part of a general discussion about a woman's mental health and well-being, and depending on how she answers, NICE has other recommendations on how to move forward.

And yes, that really might be all it takes to get the ball rolling when it comes to helping women dealing with these issues during pregnancy.

One woman named Liberty told the BBC that a hospital midwife could tell she was "anxious and not very well" during one of her checkups for a second pregnancy, and after that, she agreed to see a specialist about how she was feeling. She told the BBC:

For me the midwifery services were brilliant. It depends partly on the individual's capacity for asking those difficult questions and interpreting people's reticence and being open and non-judgmental. That's what they did so well.

It's likely the non-judgmental part of the questioning that both Liberty and Howard brought up that is key. No woman wants to feel like she's being judged when she's already struggling with these really tough issues. Supportive health care professionals are very important when it comes to getting these women to open up and seek help if they're really having trouble with anxiety, depression, and other mental health issues during pregnancy.

This study may have found that a quarter of pregnant women struggle with mental health problems, but that doesn't have to be the end of the discussion. Checking up on women's mental well-being, as well as their physical health, is paramount to identifying and treating these concerns. Everyone should be willing to get behind that solution, because it can only lead to more happy, healthy moms and babies.