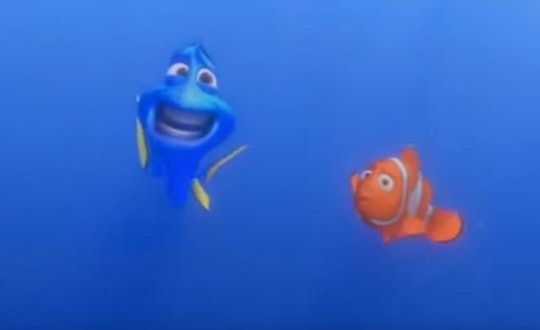 Oh hey! I've been meaning to ask: Do you speak whale? You should! It's fun! You don't need Rosetta Stone — just channel a little of your own inner Dory from Finding Nemo. It's pretty easy, so just sing your words and draw them out like, "helllllloooooooo." Well, it's hard to explain in writing. To help get you fluent in whale speak, here are the best videos of kids speaking whale, because Finding Dory is finally here. And I don't know about you, but after all of the depressing news of the week, a sweet, heartfelt Ellen DeGeneres-voiced cartoon is exactly what I needed.

The story of how DeGeneres learned to speak "whale" in the first place is pretty hilarious. She rented a house in Hawaii next to a woman who would spend all day doing yoga to a recording of whale songs, according to Cinema Blend. DeGeneres became so familiar with them that, when she was asked to speak whale in Finding Nemo, she was totally prepared for the job, thanks to the nutty yoga lady.

Whale speak has become so popular that June 11 was designated by Disney as "Speak Like a Whale Day," and there were plenty of kids who celebrated by posting videos of themselves speaking like whales. And the result was adorbs.

And, finally, here are 10 epic videos of kids speaking whale.

Editor’s Note: The video since been deleted.

2. These Beach Girls Are Ready For Finding Dory

4. This Girl's Mom Is Clearly The Expert

Also, I swear at about 21 seconds into this video the little girl rolls her eyes. They start being annoyed by their parents at such a young age.

7. Everyone Can Speak Whale

9. What?! Whale Speak With Costumes?!

10. Whale Speak With A Scream, Because Toddlers Will Be Toddlers