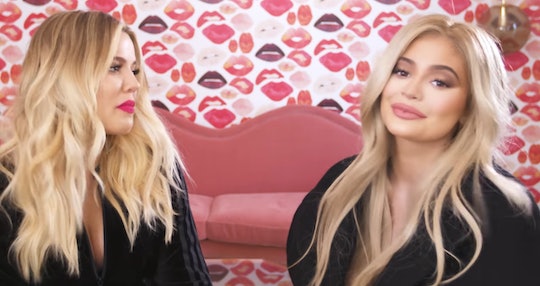 After months of rumors, it's becoming clear that reality TV's royal family has no intention of confirming or denying whether two new heirs are on the way, so the public is on their own to figure out the truth. But if you do your detective work, it's clear that Kylie Jenner and Khloé Kardashian are definitely pregnant, because they're not being too careful about hiding it. It's possible that they're even dropping clues on purpose, because they feel bad leaving their fans in the dark. But whatever the reason, the hints are out there, if you look for them.

We've all seen the quotes from "sources" that are "close to the family," and while they very well could be true reports from loose-lipped friends, or Kris Jenner in a Darth Vader voice-changing mask, they could just as easily be made up. The only way to know for sure is to go to the sources: the *rumored* pregnant women, and those who are known to be close to them, i.e. their family. There's no way that many people can keep two huge secrets for long; someone was bound to slip up and get caught shopping for onesies eventually. Here's what we know so far:

Kris Has PJs For Days

Grandma Kris Jenner recently posted on Instagram thanking Burt's Bees Baby for the nine sets of pajamas the company sent her "for every one of my grandchildren." Quick recap: Rob has one kid, Kourtney has three, Kim has two, and another on the way. That's two extra outfits, isn't it? Could it be that Kris revealed the nation's biggest secret to a "family jammies" manufacturer when she asked for the swag? Or maybe the company sent nine just in case, because their employees don't live under rocks and have presumably heard the rumors.

When is the last time that you saw Kylie or Khloé's bodies? And no, I'm not talking about throwback photos or episodes of their show that were filmed months ago. The sisters social media photos are almost exclusively tight face shots nowadays...

And when they're not cropping out their torsos, they're covering them in big, baggy sweaters. You live in California, ladies! We know you're not cold!

More Than Half Of Katy's Friends Think They Are

Studies have shown that the wisdom of the crowd is totally legit. If you want to know how many jelly beans are in a jar, find the median of everyone's guesses. If you don't know the answer on Who Wants to Be a Millionaire? ask the audience. And if you want to know if Kylie and Khloé are with child, poll Twitter. Boom. Science.

Last week, according to the Daily Mail, Kylie shared a couple of interesting photos on Snapchat: a dozen glimmering, beautiful Original Glazed donuts from Krispy Kreme, and a note on the box warning others that they were all for her. This is something that only a pregnant woman would do, because those magical circles of deliciousness absolutely do not melt in anyone's mouth and give them life, and your average non-pregnant person currently typing these words most certainly does not travel out of state twice a year for the sole purpose of purchasing and consuming the exact same amount. Nope. That's eating for two, silly.

Khloé's Messy Friend Did A Thing

On Sunday, Real Housewives of Atlanta star Kim Zolciak-Biermann may have accidentally confirmed Khloé's pregnancy with a weird, deleted Snapchat. According to People, Zolciak-Biermann could be heard saying that she's thankful she doesn't have a sister, "because I'd be really pissed in all my pregnancies," whatever that means. She then encouraged her 20-year-old daughter, Brielle Biermann, to expose her breasts, saying, "Show Khloé how big her t*ts are gonna be." The Snapchat was deleted minutes later. Some speculate that it was supposed to be a private message sent to Khloé, and others are just shocked to find out that Real Housewives of Atlanta is still a thing.

Literally Everynody Is Pregnant, Even You

The GOP has won and we are all pregnant now. Everyone. You, your dog, your brother, even your aunt who had a hysterectomy. All preggo. Go flaunt your bump, mama.

During an appearance on The Late Late Show with James Cordon, Kim had to the choice between confirming her sisters' pregnancies, denying them, or drinking a sardine smoothie. Skip to about six minutes in, if you're a bit of a sadist.

A September episode of Life of Kylie showed the titular star using an oxygen mask during a trip to Peru, with her doctor explaining that she was feeling "not so great" due to the high altitude. The espisode was shot in May, when she would have been newly pregnant, which also makes one feel "not so great."

I know it doesn't look like she's six months pregnant in this picture from Kim's baby shower last weekend, but you have to remember that Khloé is super tall. That baby's probably just stretched out inside her roomy torso.

The ratings for Keeping Up With the Kardashians were down, Kim was radio silent after her robbery, Kanye publicly supported Trump, and then Kendall's not-so-well-received Pepsi commercial almost killed it for the family. Adding a kid sometimes revives a sitcom, so hey, why not?