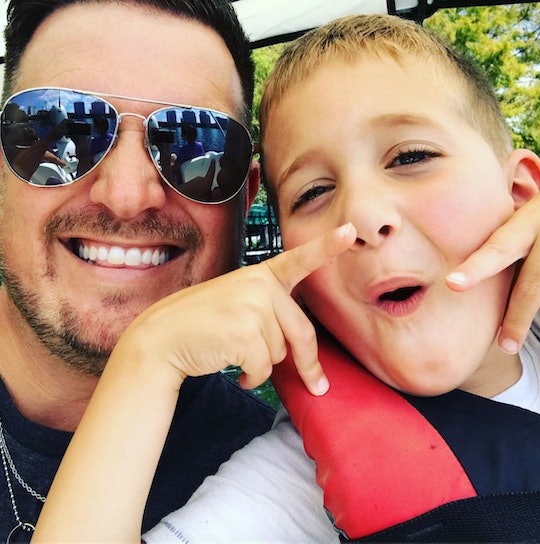 10 Dad Jokes That Prove Your Partner Is Basic AF

My partner's humor is one of the first thing's that attracted me to him over 13 years ago. But over the years, and specifically since becoming a father to our two children, his sense of humor has shifted. He used to make me belly laugh for hours on end over a hilarious thing that happened to him, but now his "jokes" are, um, a tad more predictable. There's a standard list of dad jokes that prove your partner is basic AF, and I'm pretty damn sure my partner has told them all since he became a father.

When I met my partner, I couldn't have imagined he'd be one of those dads. You know, the ones that pretend to "pull off" your nose when you're young, then "return" it so you don't freak out. I mean, my dad wasn't one of those dads. But something happened to my partner over the years, and after our kids came along. Perhaps it was the sleep deprivation, or the responsibilities of parenthood, but he stopped trying to hold himself to the standard of his pre-parenthood jokes. I could almost see them disintegrating as the tired, basic humor of the quintessential dad joke slowly emerged until, eventually, dad humor took over completely.

Every now and then, he'll tell a really funny story, but for the most part our kids have come to know their dad as the parent with the dad jokes. Here's a list of dad go-to's that prove my partner, and perhaps yours, is basic AF: