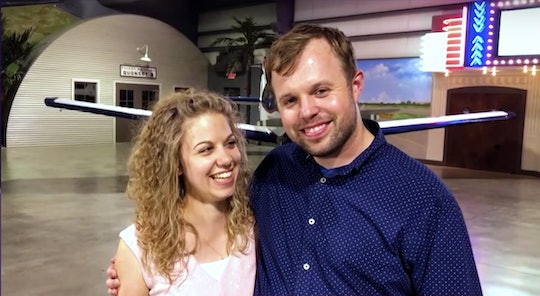 Another day, another Duggar engagement. The world has watched closely as John-David Duggar, the eldest of Michelle and Jim Bob's super-sized brood, began courting and eventually, announced an engagement. With a wedding date reportedly set for very, very soon, many fans are probably hungry for more about the newest Duggar-to-be. So, here are 10 facts about Abbie Burnett, John-David Duggar's fiancée and very-soon-to-be wife.

In July, Duggar officially got engaged to Burnett after having known each other since they were young, according to People. “Wow! We are engaged! This feels even more real than before! It was a special moment to share together,” the couple said in a joint statement on the family's website.

They continued to explain that they felt called to be with one another, and that they were overcome with gratitude that they had found each other, and were looking forward to planning their big day. “The proposal and the ‘YES’ really solidified that we want to spend the rest of our lives together. One of the most amazing things about following Christ is being able to trust Him to direct your path and lead your life,” they continued in their engagement announcement. “We are so thankful that He led us to one another. Now we need to start thinking about a wedding!”

But before Burnett walks down the aisle, there are a few things fans of the Duggar family should probably know about her background.

1. Her Family Is Friends With The Duggars

In recalling the story of how they met, Burnett and Duggar explain that they had actually known of one another since childhood, as their families were friends growing up, according to People.

In a TLC video, Burnett explained that the first time she really got to know John-David was when he went to her home state for a church service, and they reconnected.

According to People, Burnett is an R.N., though it has yet to be disclosed what specialty she works in, and where.

4. Her Dad Was Seen In One Of The Duggar's Earliest TLC Specials

The Duggar Family News Facebook page explained that Clay Burnett was featured on a special episode of 16 Kids and Counting, prior to the family having their series full-time.

It may not be quite at Duggar scale, but Burnett is used to a large family, as she's one of eight siblings.

Though it's Duggar protocol to not have social media accounts until they are engaged or married, John-Duggar and Abbie started their own joint Instagram while they were still courting in late June.

Something that Duggar and Burnett won't have trouble connecting on is religion. Both families follow ATI, "a Biblically-based home education program for families who desire to raise up sons and daughters who are 'mighty in Spirit' and able to impact the world for Jesus Christ." In fact, her family's testimonial is featured on ATI's website.

8. They Prayed Hard For Their Marriage

After meeting, Burnett says there was a lot of "prayer," "counsel," and "time together" spent prior to deciding to make their courtship official, as Entertainment Tonight reported.

9. She Fell In Love With John-David "Quickly"

The couple only courted for a month before getting engaged, in Touch Weekly reported. "We fell in love very quickly. It's been a wonderful journey thus far, and taking the next step to move on to a courtship," the couple shared on their family's website after they first got together.

10. She's Reportedly Getting Married In November

And now... for the most exciting news of all. OK! reported that Duggar and Burnett will reportedly be tying the knot on Nov. 3, 2018. With possibly only a few more months to go before the big event, there's a lot to look forward to.

All in all, Burnett seems like a perfect match for the eldest Duggar brother. As their nuptials approach, there's so much to look forward to as the couple hopefully continues to share some of the sweetest moments of their lives with the world.