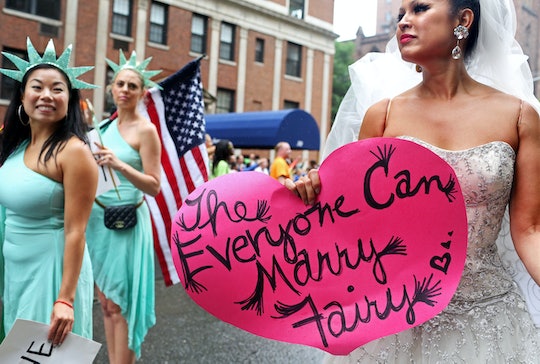 There is something magical about Pride. It's a protest, it's a family gathering, it's the best parade you've ever been to and the most loving safe space you could ever enter. It's a protest and a declaration. Pride is the steadfast reminder that love is what matters, strength in numbers wins the war, and there's always something worth fighting for. When you get to the parade or festival, you'll notice one thing apart from the fabulousness — the signs. There are so many funny Pride parade sign ideas out there, but I've made it my job to gather some of the best.

While the tenor of Pride has shifted somewhat over the past several years, it still remains essentially a protest and an affirmation of the value and worth of the LGBTQIAP community. It wasn't that long ago that the gay community was granted the right to marry, and while that was a huge hurdle, recent events have proven that there's still so much more to fight for. The Pride parade is all about acknowledging that tolerance isn't enough. Tolerance can be manipulated or revoked. We need radical acceptance, and you can certainly get your point across with some funny, sassy, snarky signs held high above your head at Pride. (Also, don't forget your rainbows and maybe some fairy wings — the other best parts of Pride.)