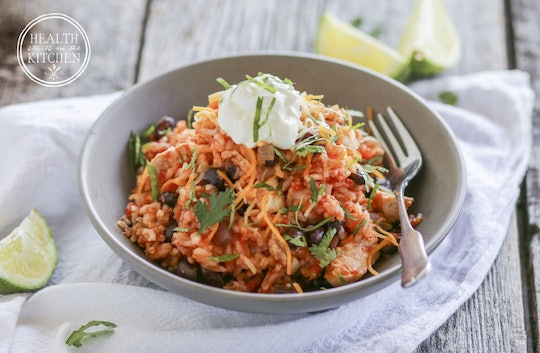 Health Starts In The Kitchen

10 Instant Pot Recipes Even Your Kids Will Love

If kitchen gadgets are your thing, you've definitely heard of the Instant Pot, which is probably the hottest cooking appliance right now. It's got all the fancy settings and buttons of a slow cooker — and more — but it's fast and that's probably because it's actually a pressure cooker. If you're an Instant Pot newbie, or have one that's been collecting dust, brush it off and get cooking (fast!) with these instant pot recipes your kids will love — tonight! It's the type of gadget that your mother-in-law probably swears by, and soon you will, too.

In theory, a slow cooker is a great idea. Except.. you're a busy parent who only thinks about dinner when the kids start whining or you don't ever remember to take meat out of the freezer until lunchtime, and then forget to come up with a plan for it until it's too late. That leads to a lot of tater tots and stir fry at our house, because planning is not my forte. If you're like me, you need a gadget like an Instant Pot (that can cook everything from chicken to legumes in a fraction of the time) and this set of recipes that are kid friendly-but still pack enough flavor for the adults to enjoy.

The even better news? The instant pot also has a slow cooker option, so you don't have to take up room with two large kitchen gadgets when one can serve both functions — slow cooking when you have time to plan ahead, and fast cooking when you're scrambling to get dinner on the table.