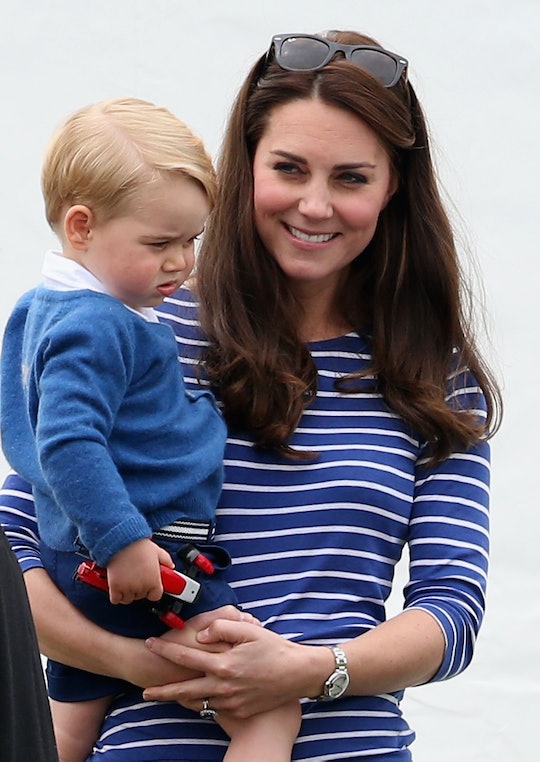 HBD Kate Middleton! Here's A Look At 10 Times She Was The Most Relatable Mom Ever

There's nothing like the rollercoaster that is childrearing to remind you that we're all in this together. Celebrity, royal, or the mom next door; everyone gets covered in vomit, gushes with maternal pride, or is forced to defuse a nuclear toddler meltdown at some point. As her 37th birthday is today (HBD, mama!), here's a look at 10 of Kate Middleton's most relatable mom moments. Because even though she will one day be the actual Queen of England, Duchess Kate is still a just a mom.

Over the course of her time as Duchess of Cambridge, she has shown the many fans of the royal family just where her affections lie: with her family. And although it may be hard to imagine what it is like to dine with the Queen and rock royal heirloom jewelry, Duchess Kate is more than a little relatable when it comes to her family life. These are just a few examples of times that Middleton was a mom of the people.

1. Every Time She Took A First Day Of School Photo

In order to make school a "private area" of the kids' lives, there won't be any official back-to-school portraits released this year, as People reported. But who can forget last year's photos of Prince George and Princess Charlotte heading to their new schools? One of the sweetest photos of Princess Charlotte was taken by Middleton herself, according to Vogue Australia. Every parent loves to snap those school shots, and the Duchess is no exception.

2. When She Stopped A Meltdown At Pippa's wedding

Oh, the joys of motherhood. You know, like stepping on a LEGO in your bare feet or stopping a very public meltdown by an exhausted toddler? Middleton has plenty of experience in the latter. Take her quick action at sister Pippa Middleton's wedding, where she intervened as both of her older children approached tantrum territory. Prior to the ceremony, Middleton told guests that she "really hoped her kids would behave," according to Motherly. Been there, mama.

3. When She Busted Out The "Mom Face"

But my personal favorite moment from Pippa's wedding had to be the moment that Middleton embodied all that is motherhood with a single facial expression. You know the one.

4. And Again In Homburg

Princess Charlotte threw another little fit — as toddlers are known to do — while her family was visiting Hamburg, Germany in 2017. But Middleton was there to soothe her little princess, utilizing her and Prince William's go-to parenting technique of getting down to eye-level with her daughter.

5. When She Was So Chill Without The Kids

At the most recent royal wedding, Middleton was a bit more laid back as she enjoyed Princess Eugenie's nuptials sans child wrangling. As PopSugar reported, Duchess Kate was the picture of peacefulness at the wedding while her kids were busy laughing and playing elsewhere. What mom can't relate to the joy of a little time to themselves? Heck, she even squeezed in a bit of PDA with Prince William. YAAAAS.

6. When She Comforted Her Hurt Child

Nothing fixes a boo-boo better than a kiss from mom. And when Princess Charlotte hurt herself at Trooping the Colour in 2018, Middleton was there to scoop her up into her arms and comfort her, according to Hello! Magazine. How sweet is that?

7. When She Said She Likes The Simple Time The Best

Despite all of the trips to fabulous places around the world, and extravagant appearances, Middleton wrote in a letter as Royal Patron of East Anglia’s Children’s Hospices that she prefers quality time with her children over just about anything, as Town & Country reported:

Spending quality time together is such an important aspect of family life and for me, as a mother, it is the simple family moments like playing outside together that I cherish.

I can't think of a single mom who would disagree with that sentiment.

8. When She Forgot A Crucial Item

In preparation for the new school year, Middleton visited the store John Lewis in London with Prince George and Princess Charlotte to pick up new school shoes to go with the kids' uniforms. But Glamour reported that she forgot to bring along socks for the kids — who were wearing summer sandals at the time; they had to borrow socks from the store to try on shoes. And while I'm sure that the store did not mind lending socks to literal royalty, Middleton related to moms everywhere when she forgot to bring everything they needed.

9. When She Wiped Drool On Her Dress

This one is a bit of a throwback, but when Prince George was still young enough to drool all over himself, Middleton made headlines for clearing some slobber from his face and wiping it on her designer dress. Does it get any more mom-relatable than that?

10. When She Talked About The Loneliness Of Motherhood

Adorable moments aside, Middleton is also relatable in her honesty. She doesn't gloss over the difficult nature of life, motherhood included. For example, when speaking at the Global Academy round table discussion she touched on the loneliness that comes with being a mom, as People reported:

There you have it, folks. Kate Middleton wears many hats — philanthropist, royal, and fashion icon to name a few — but she is also a mother. And the shared reality of raising children unites moms everywhere in their common experience of joy, laughter, and a little drool.

Happy birthday, Kate! Here's to another year of you being the coolest mom on the block.