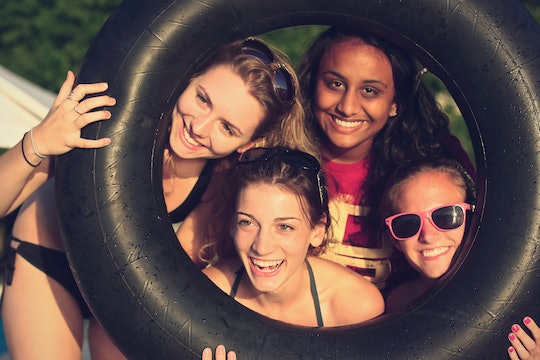 10 People Your Friends Turn Into When You Have A Baby

Your friends have seen you through good times, bad times, drunk times, really drunk times, breakups, professional achievements, and that trendy juice cleanse you tried back in ‘09 before you learned to love yourself and realized the diet industry is a sexist marketing machine designed to make you hate yourself and then profit off of selling you bullshit solutions to "fix" your body, which is actually totally fine (#NeverAgain).

Your friends, in short, are awesome. And they stick with you through every change you've undergone, which have been a lot.

Now that you’re a mom, your friends are going to continue to see you through some crap, but the presence of a child might slightly alter how they approach you, at least at first. And some of the “crap” they see you through will be literal crap. As in shit. Your baby’s shit. Which is now a thing you have to deal with, and hopefully your friends will stick by you during those dark days.

I was the first of my core group of friends to have a baby and the reactions of my besties really ran the gamut. From the friends who literally shrieked in the middle of the bar at the Union Square W Hotel, to the friend who plastered a fake smile on his face and then later disdainfully compared getting pregnant to getting an STD, their emotions, like my own, were often all over the map. It turns out that when it comes to your best friends, having a baby, in the end, really doesn’t change anything at all, but that initial jolt of, “Oh, holy crap: What is this new little creature and what does it mean that you’re having it?” takes some getting used to.

I feel like there has been much ink spilled over how being a parent changes you, but how does it affect your nearest and dearest? Let’s find out who your friends become after your kid arrives: