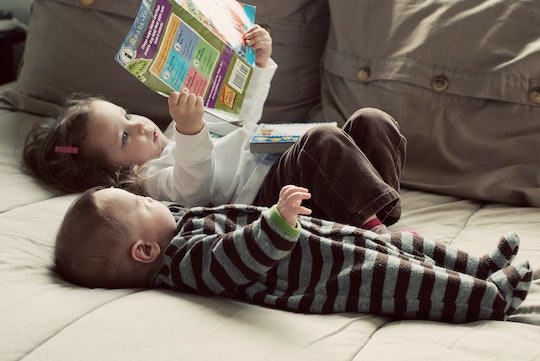 My alarm clock is set to play NPR in the morning because it's how I know what's going on in the world. This morning, I was shocked to hear the words of a bigoted presidential candidate — I don't even want to give him more legitimacy by naming him — lobbying to put a halt to Muslim men and women hoping to enter our country. Because I have two kids who are up before my alarm, they hear the radio too. They hear quotes about Muslims, and terrorists, and refugees, and they don't always know the context. I don't want them to absorb the inflammatory statements that scare me so much. I want them to know the real Islam. I want them to know about its rich culture, and its many followers, but I struggle with exactly how I should teach my children this. Should I read my children books about Islam? Should I take them to visit mosques? Though they're much too young to understand what's said on the news, but should I let them watch it anyway?

In an effort to prepare my children for living on our planet (which I'd argue is most parents' number one goal), I seek out diverse narratives to share with them. So one of the ways in which I plan on combatting so much of the negative images we are forced to absorb (whether we agree with them or not) is to read them books. I want to provide them a context outside of the rhetoric of the news. I want them to be able to learn, understand, and digest on their own terms without outward opinions influencing their own personal opinions. I want to give my children a fighting chance to become who they are without the media's influence shaping them. As children, they're inclined to believe what they hear — from TV, from their friends, from their teachers, and (arguably most importantly), from us, their parents.

I don't want my children to grow up believing the notion that a religion is bad or yields bad people. I don't want them to draw parallels that don't exist, and my partner and I certainly don't want our son and our daughter to think it's OK to discriminate against a person or people because of what they believe. Islam is the religion of the Muslim people, and according to this Muslim mom raising her kids in the U.S., this is what she's taught her children of their religion:

All he knows of Islam is that kindness only beautifies a thing and that all the prophets of God, from Adam to Noah to Jesus to Muhammad, were on earth to teach it. He imagines the prophets were superheroes given superpowers by God and loves each story, because that is the language of good guys and bad guys is the one he understands.

So in an effort to give my children the tools and resources they need, I took to Twitter to ask for recommendations for books that depict Islam correctly.

These are some of the books I plan on reading with them (or reading myself):