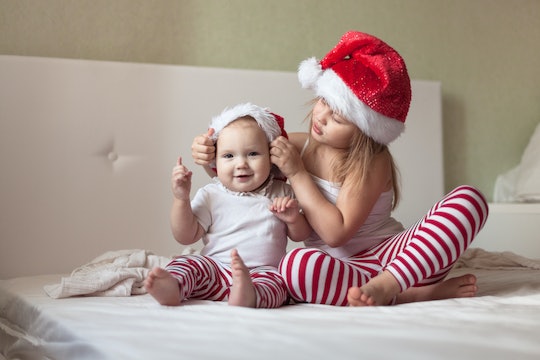 My self calculated due date was Dec. 15th. It was then amended, by my doctor, to Dec. 20th. After an ultrasound it was changed to Dec. 23rd. I didn't actually go into labor until 8 days later, and then endured a 48 hour labor and delivery process before my son finally arrived, on January 2nd. However, prior to his late arrival, I joined a December babies birth group, so I think my son still qualifies for "The December Babies Who Are Automatically Badasses" club.

When I first found out that my baby would be born in December, I have to admit I was a bit disappointed for him. I imagined that he would be robbed of the best birthday celebrations, and that everyone would be consumed with Christmas preparations to the point that his birthday was either forgotten, or just "part of the holiday festivities." I thought he might encounter the horror of having his birthday gifts wrapped in Christmas paper, because we all know the people that buy you a "birthday/Christmas combo present" are the absolute worst.

My birthday is in May and, growing up, each celebration was spent enjoying garden parties, picnics, and bouncy houses in the yard. I couldn't imagine a cold and frosty or indoor birthday. However, I soon realized, along with the other moms in my birth group, that being born in December (or very early January) is actually quite awesome. So, if you're staring a December due date in the face, know that your kid is automatically going to join the ranks of ultimate badasses, and here are just a few reasons why:

More Like This
41 Strong & Sweet Baby Boy Names That Start With “K”
The Best Toys For 3-Month-Olds
Is It Good For Babies To Be Exposed To Germs? It’s Complicated
7 Surprising Old Wives' Tales About Christmas Eve Babies