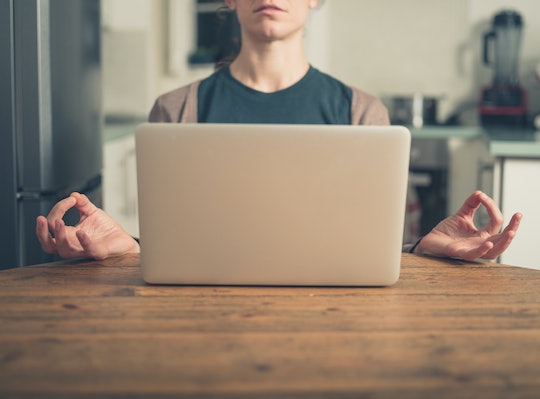 Social media is the absolute best and worst invention since the spork. I use forms of it, to be sure, but mostly for reasons that have little to do with wanting to envelope myself in all the ranting, bragging, or tearing others down that seems to exist on the internet. That is, unless there are cat photos or hilarious memes involved. In general, the social media posts on parenting we're all guilty of rarely say what they actually mean, too. You usually have to be a parent yourself in order to read into the subtext of what parents really means when they hit "post." So, is it worth it to even go online? I say yes, you just have to know what you're reading.

There are some days I want friends, family, and complete strangers to believe I'm living the life. I'm fully dressed, made an eight course dinner, and my well-behaved children are volunteering their time at several local shelters after they're finished sewing blankets for war vets. That's what gets posted because, behind the scenes, it's an actual sh*t show. The real post would be more like, "I'm not dressed and haven't changed out of my pajamas since yesterday, we got Happy Meals (again), my daughter is grounded for lying, and my son is mooning me this very second." If I share that every day, everyone will know how little I have my life together.

I can't tell you which post would be true today. Honestly, it would probably be a combination of the two. The point is, some parents who post on social media are damn liars and I know because I've been guilty of it, too. It doesn't make us bad people, though. If anything, it shows our dedication to putting others at ease by lying straight through our computer screens. Sort of a, "See? Motherhood isn't so bad so you can totally do this," white lie that keeps our population numbers up. I'm just not entirely convinced this little "white lie" is a good thing, usually.

Yes, there are amazing times I want to capture, truthfully, but there's also some crappy times, too. Why can't we just say that already? For instance yesterday, I Tweeted about my son giving up his naps. There wasn't a smiley face about how excited I am to spend more time with him, it was a GIF of a woman drinking because that's how I feel. Stating that doesn't make me a bad mother, as I'm sure many other mothers can relates, so why do we feel the need to pretend things are shinier than they really are? With that, I'm calling out all those social media posts on parenting that can't always be for real. If they were, they'd mention how much crying is involved.