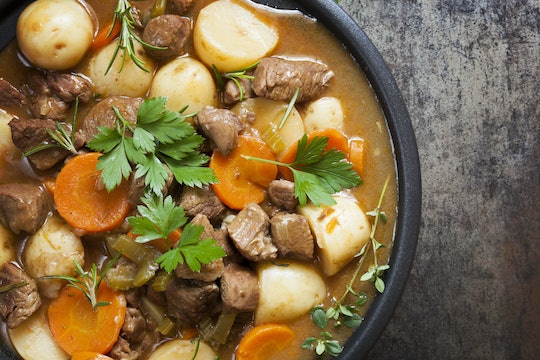 As St. Patrick's Day draws near, it's only natural to celebrate with foods from the Emerald Isle. But if you're short on time this March 17, then these St. Patrick's Day Instant Pot recipes will help you whip up some delicious dishes in no time. With the handy device of an Instant Pot, a hearty beef stew or Irish soda bread is just minutes away.

In general, traditional Irish cuisine lends itself to Instant Pot cooking pretty well. After all, the Instant Pot is amazing at making stews, potato dishes, and other hearty fare. It's the perfect contraption to cook any St. Patrick's Day appropriate recipe in.

Have you ever wondered why beef stew, corned beef, and all things potatoes are so deeply associated with Irish cuisine? They were foods of necessity. Stews could be cooked with only a few ingredients, a pot, and an open flame, which worked well for Irish people dealing with mass poverty, as noted in The Culture Trip. Basically, pretty much anything can go in a stew. The famous Irish corned beef, cured with giant grains of salt, was really more of an export to Europe and the Americas in the 18th century, according to The Smithsonian. Sadly, many of the Irish would not have been able to afford corned beef at the time. And although the potato is a new world food, it's difficult to imagine Irish cuisine without it. The potato became a staple crop in Ireland in the early 1800s because it was affordable and easy to grow, and it's estimated that nearly half of the Irish population relied on potatoes at as a major food source at this point in history, according to Encyclopaedia Britannica. Not to bum you out, but the reality is that many delicious Irish recipes have roots in some pretty desperate times.

Thankfully, at a time such as St. Patrick's Day, people the world over celebrate this tenacious country's amazing cuisine. Fire up your Instant Pot and treat your family to some of these fantastic Irish recipes.