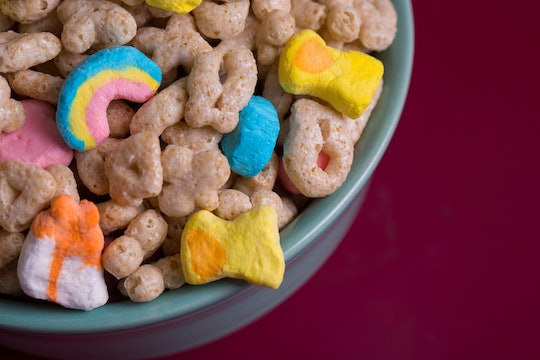 Your Kids Will Love These 10 St. Patrick's Day Recipes (Hint: There Are Lucky Charms)

I am the parent of the two pickiest eaters on the planet. My son won't eat anything not covered in hot sauce, and my daughter just won't eat anything that isn't bacon and eggs or made with sugar. Getting them to eat is one thing, getting them to eat a themed meal is a Herculean task. Thankfully, there are a surfeit of creative, inspired recipes on the internet, so finding kid-friendly foods for St. Patrick's Day is as easy as a few clicks.

I know that I am never going to get my kids to agree to eat corned beef and cabbage or anything braised in Guinness. Beer cheese soup? Maybe. Pot roast and potatoes? Nope. There's a method to getting children to eat new foods, and for me, that's finding something in the dish that's already familiar to them, and exploiting the hell out of it. They like chicken fingers? Well, then maybe I can get them to eat these baked bacon cheddar chicken tenders. If that doesn't work, I'm not going to lie, I have been known to bribe my kids to eat. I'm not proud of it, and it's probably the worst parenting decision ever, but dang it, I can't watch my daughter eat one more bread and butter sandwich, I just can't. Especially not on a holiday. Hopefully these recipes will entice her.