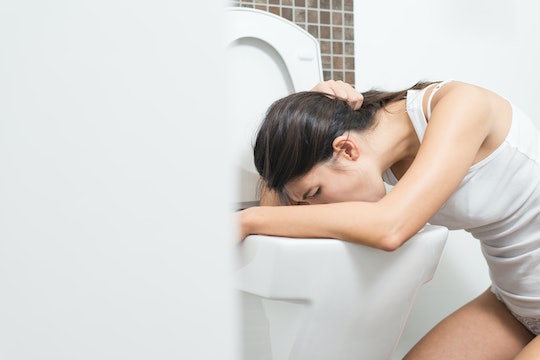 10 Struggles Only A Mom With Hyperemesis Gravidarum Can Understand

When pregnancy is played out on television, a woman usually figures out she's pregnant by hilariously or comically "losing her lunch." In real life, however, no one is laughing when they're running to the bathroom in the middle of a work day to go throw up. Though it's frustrating, morning sickness is quite common among pregnant women. However, some women experience the more severe side of morning sickness, and deal with what's known as hyperemesis gravidarum. The struggles of having hyperemesis gravidarum are a lot like those that accompany morning sickness, only worse. A lot worse. Like, exponentially worse.

So what is hyperemesis gravidarum, exactly? Well, in medical terms "hyper" means "excessive," and "emesis" pertains to vomiting. Combined, they mean "excessive vomiting," which is exactly what a woman suffering from hyperemesis gravidarum does. While hyperemesis gravidarum only occurs in about 1 in every 200 pregnancies, that amounts to around 600,000 cases per year. Having struggled with it myself, I consider myself somewhat of an expert on hyperemesis gravidarum (obviously not an actual expert, but someone with an unfortunate amount of earned knowledge that I wish I didn't have but am "blessed" with, nonetheless). My first sign of my pregnancy occurred when I was unknowingly four weeks along. I was eating a plain bagel at work when I suddenly felt an intense wave of nausea come over me. I thought it was odd, since I was otherwise feeling fine, so when I went home, I took a pregnancy test. Not surprisingly, two pink lines gifted me with the news I had been hoping for. My excitement was unfortunately short lived, as the nausea soon returned, but this time, it decided to stick around.

Unlike morning sickness, hyperemesis gravidarum doesn't always go away. It can last throughout the entire duration of a woman's pregnancy. It can cause severe dehydration and even require extended hospital visits. In my own case, it stuck around for nearly six months. I spent six miserable months hating pregnancy because of the constant and intense urge to vomit I felt every single day. I understand the following ten struggles of hyperemesis gravidarum all too well, and if you're suffering from it too, well, I've been there and you're not alone and I feel for you.