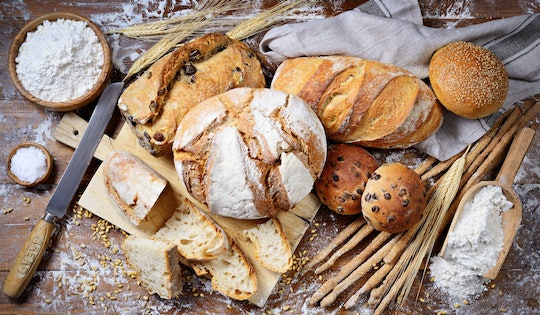 Celiac is an autoimmune disease that affects one out of 133 people in the United States, according to the Celiac Disease Foundation. On top of that, Medical Daily states that one in seven people have reported a form of gluten intolerance or sensitivity and the foundation has a checklist you can fill out to see if your symptoms are one of those surprising signs you're gluten-intolerant and didn't know it. Most of us know Celiac as the disease that doesn't allow you to have any pizza, croissants, or other bread products, but what are the symptoms exactly?

From feeling headache, ,to unexplained rashes, to losing weight and feeling lethargic, there are several symptoms that could suggest that you have a gluten allergy. First, it's important to recognize what gluten is. When flour interacts with water in the kneading process, two proteins in wheat combine to form gluten. For any of you who have made bread before, you'll know that it's the substance that gives the dough that elastic texture. Humans have been eating wheat with gluten in it for the past 10,000 years, but for some reason, between then and now, there are some major differences between how bread is made and consumed.

NPR reported that in the past 20 years, the reported cases of celiac disease has doubled, and a study published in Pub Med further supports that gluten ntolerance is on the rise, now affecting one percent of the population. Nothing replaces speaking with a physician about your health concerns, but while you're waiting for that appointment, here are some subtle signs you might have a gluten intolerance.

More Like This
Pelvic Pain During Pregnancy: What Causes It & How To Deal With It
Why Do Toddlers Throw Themselves On The Ground During Tantrums? They Have Their Reasons
What Is Acid Reflux Tape? Chrissy Teigen Swears By It
43 Thanksgiving Food Coma Instagram Captions For Your Post-Feast Pics