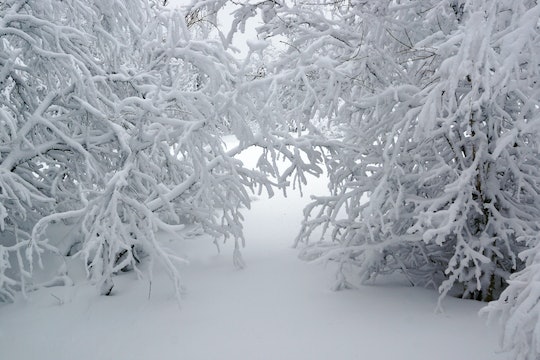 10 Things Every Michigan Parent Thinks During The Winter

I live in a state that is shaped like a mitten, which if anything, should tell you that we are state that requires wearing mittens. A lot of mittens. Michigan, IMO, is a pretty awesome state to live in. We have like, two states, in one, and all four seasons. (Even though winter in Michigan gives me lots of feelings as a mom.) In the warmer months, I'm never more than a couple hours away from fresh water beaches that don't sting my eyeballs beyond all belief, there are no bugs bigger than my head living here, and there are no sharks that could eat me when I'm simply trying to go for a swim. (This is a big deal for me. I have a thing about sharks. I mean, really. I understand that surfing is magical for the soul and everything, but I can't understand the people that go back after having a limb chomped off by a shark. A shark!)

Michigan summers are like no other. Daylight stretches out until after 10 p.m., the aforementioned beaches, the feeling of possibility that anything could happen. Heck, even Kid Rock knows that unique magic of a Michigan summer. (LOL.) Those magical Michigan summers and that brief interlude of a whisper of jaw-dropping, breathtakingly beautiful fall beauty is like salve to our poor, chapped souls, however, because for the remaining eight months of the year, the Michigan Mitten is locked into a frozen and icy tundra.

Our Michigan winters seem like months and months of bitter cold (how many times has your kid had school called off for freezing cold temperatures? Mine had 10 last year alone!) that will never end. And just when we think they won't ever end, the snow melts a little and we are then sloshing our way through the dirtiest slush piles known to mankind. To top it all off, it seems like the kids are always sick and stuffed up, and we're all constantly on the verge of going stir-crazy.

And no matter where our journeys on Earth will take us, from the sunniest beaches of California to the the magical spinning teacups of Disney, a Michigander never truly forgets the truth of what it's like to parent in the winter.

Here's a peek into the good and the bad of life in the Michigan Mitten during the winter:

We're More Excited Than The Kids For The Snow

Honestly, I feel like a puppy with amnesia when the first snowfall first hits. It doesn't matter that the next six months of my life will be absolute hell on earth, there is still something about the first snowfall that turns me into a sentimental ball of mush — even more so than the kids.

We Think This Year's Snowfall Won't "Be So Bad"

So we don't buy new snow gear for the kids, thinking they'll still fit comfortably into their clothes from last year, only to find out that when the time comes, all the kids snow pants and jackets are at least 10 sizes too small.

I have approximately 8,000 pairs of snow pants, snow boots, hats, gloves, scarves, mittens, and winter coats and yet somehow, not one of them will fit my kids this year.

It's Fine To Treat Marshmallows As Their Own Food Group

My kids barely have their boots whipped off before they're demanding marshmallows with hot chocolate, er, I mean, hot chocolate with marshmallows, after a blustery two minutes playing outside in the snow. It's tradition ...

... And it's also a winter food group staple. Nutrition, amirite?

We Get SO Excited For Baby Snowsuits

Parents from other states might spend all winter hoping they'll have an excuse to deck their baby out in that snowsuit they bought, but Michigan parents know the very, very real truth that comes with using a snowsuit on your kid. Cute? Definitely. A pain to take off and on for diaper changes and blowouts? Absolutely.

Our Plans Are Very Much Controlled By The Weather

If it's more than a foot, I'm not moving. But anything less than that is pretty manageable.

The Kids' Snow Boots Are The Enemy. Always.

If you've ever tried to shove an adorably helpless baby foot into a winter boot, you will understand what I'm talking about here. Plus, there is a 99.9 chance that as soon as she gets a chance, she will whip them off and lose one of them. But just one! Never both!

We Know A Good Joke When We Hear One

Hahahaha, don't make me laugh. I eat an inch of snow for breakfast. (No, really, I have done that. It's called #SnowconeSunday in our house and the kids think it's hilarious!)

There is a time, approximately halfway through every winter that I'll temporarily lose my sh*t over the nonstop snow and cold. It may be only temporary, it may be brief, and it may not fully lead to packing up the entire house and moving away, but there's definitely a point every season when I think: Why the hell do we live some place where it's literally colder than Antartica?

And then I see how excited my kids get about the latest 14 feet of snow, and I remember: Oh yeah, this is why.

We're Over The Snow And Winter Pretty Fast

Come March, there's not much brain power left for contemplating anything beyond: Is this never-ending snow finished yet?

Sunshine In Any Form Equals Spring. That's It. That's The Rule.

So what if it's only 50 degrees and there's still snow on the ground? That first glimmer of warm weather means it's time to take the kids outside in some non-snow clothing! I once, no joke, saw someone full-on sunbathing in a bikini when the thermometer was barely registering above 50 and TBH, more power to them!

It's just the Michigan way after a cold, dark winter, so just let us be.

More Like This
Ginger Zee Had A Perfect Response After A Troll Asked Her "Who's Raising Your Kids?"
It's A Beautiful Day In Jenny Slate’s Neighborhood
Why It's Crucial to Get Good Sleep As A New Mom — Plus, Tips On How To Do It
How To Wash A Mattress Cover