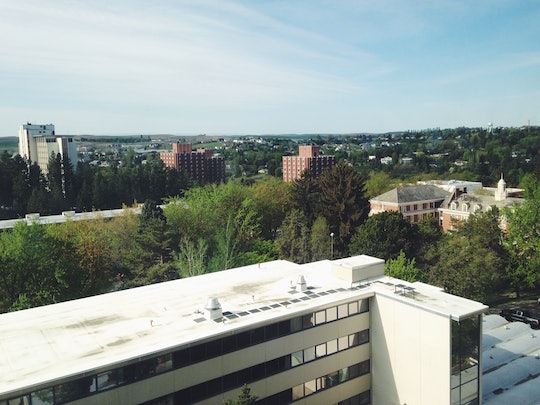 When I moved to Pullman, WA, for my husband’s graduate program, I wasn’t too worried. I'd lived in small towns before and knew that there would be both good and bad to exploring life in a city aimed at college students. Two and a half years later, I'm very well acquainted with both parts. The population is right around 30,000 – and that’s counting about 26,000 students. And it's isolated. Spokane, Washington is our nearest city, and that’s still less than 100,000 population. There are weird local things that I don't understand. My husband was once seriously scolded for asking where a woman picked her huckleberries. As a mom living in a college town, it's definitely taken some getting used to, to say the least.

My friends in Phoenix (where we lived before Pullman) have asked me to describe the small town I now call home. At best, Pullman just a farming town that is best known for being the home of Washington State University, and what that boils down to is the fact that there are farms and pot shops within a 10-mile radius. (Yep.) And did I mention that the biggest event of the year in town is the National Lentil Festival? Just let that sink in.

I can joke about Pullman all day long, but it has everything we need (and TBH, I guess I don’t need Target), and it's quickly charmed me. My husband’s graduate department is a good fit, there are plenty of little kids for my son to play with, and the weather is a mild four seasons. That said, mothering in a college down isn't without its own struggles.

Here's what it's like, straight from a woman who knows firsthand: