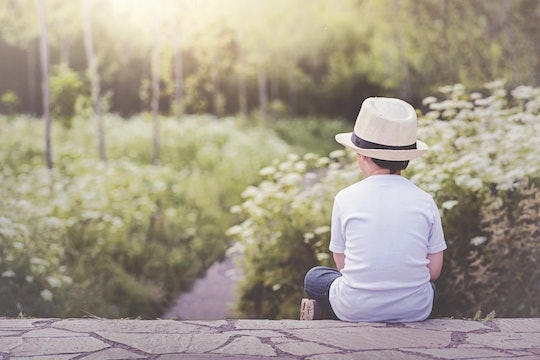 10 Things Parents Of Shy Kids Are Tired Of Hearing

If I were to describe my four year old in one word, it would be "mercurial." Some days he runs around the neighborhood, scuttling up to strangers walking their dogs so he can show them something he built out of tinker toys. Other times, he will not attend a single social event without his Kylo Ren hoodie, which completely hides his face. I understand his shyness (especially to those who also know him in his chattier moments) can be confusing or even irritating, but there are things I am tired of hearing as the parent of a shy child.

I, personally, don't really get shyness. I am, and have always been, the most gregarious person you'd ever meet. I'm basically a poster child for extroversion. I enjoy social situations and meeting new people; cocktail parties are my jam; I even enjoy small talk. Maybe it's surprising, and maybe it isn't, that I wound up married to a man who has described himself as, "painfully shy." Over many years and during many discussions on the topic, my partner has helped me become more aware of the problems shy people have and ways I can be sensitive to them. The truth of the matter is, I'll never completely get it and that's okay: I can still be understanding of the fact that some people are shy and (here's the kicker) it's not personal.

This is the revelation I wish I could share with the masses, especially as the parent of an often shy child. My kid's shy feelings aren't about you: it's something he's working out on his own. As his parent, I am doing my best to ensure that my kid remains polite even in his shyness (we're working on eye contact and saying "please" and "thank you" even when we're feeling anxious), but I'm also going to respect his nervousness and not push my kid to the point things start to get worse. When people insist on making someone else's shyness about them, somehow, no one benefits.

So, with that in mind and in solidarity with all the parents of shy kids, here are a few things I would absolutely love to never hear again: