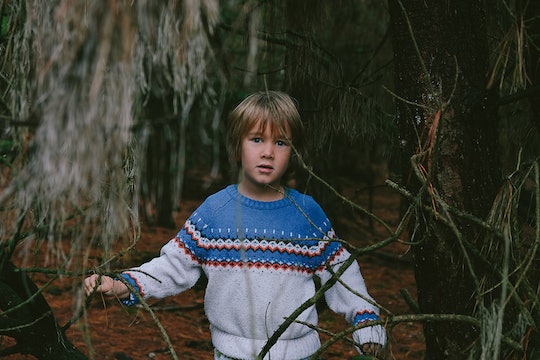 10 Things Your Highly Sensitive Child Seriously Needs You To Know

There is a scene in The Land Before Time where Littlefoot sits alone, silently mourning the death of his mother. A well-meaning pteranodon cheerfully approaches, graciously extending a cherry for the sad little dinosaur, who dolefully turns his head. The once-chipper pteranodon frowns sadly and walks away. Now, at this point in the movie, whenever we watched as little kids, my brother would burst into heaving, snot-filled sobs. "Littlefoot wouldn't eat the cherry!" he screamed. "He wouldn't eat the cherry!"

My brother's hysterics weren't limited to animated dinosaurs. Food that wasn't steamed chicken or plain white rice? Howling shrieks of disgust. The suggestion that he should go on an amusement park ride? Paralyzed horror...and then screams. Making any kind of decision? Absolutely agonizing. Once he hit about age 7 or so, his tantrums and freak-outs subsided a bit, but he was and (thankfully) remains an incredibly sensitive dude as well as one of my favorite people. So when my own child began exhibiting some very familiar behaviors: a sensitivity to other people's pain, stubborn refusal to try new things, above-average caution for a toddler, I kind of knew what I was dealing with. I once told my brother that my son once cried for a solid 10 minutes because he saw a picture of a duck that he thought was sad and that made him sad and my brother said, "Oh my God he's me."

Pretty much. They're both highly sensitive.

When I first heard the term, I admit to sort of rolling my eyes, because I thought, "Oh yeah, because everyone's child is a special snowflake," but the more I read on the subject, the more I began to think "Is my child highly sensitive?" And then the more I read, I realized, "Oh, hell yes, he is." Reading even further helped me find parenting strategies to help a sensitive child. Parenting a highly sensitive child child sometimes means throwing preconceived notions about children, parents, and discipline out the window. When it comes down to it, all kids need the same basic things, but there are a few things that sensitive children need you to know.