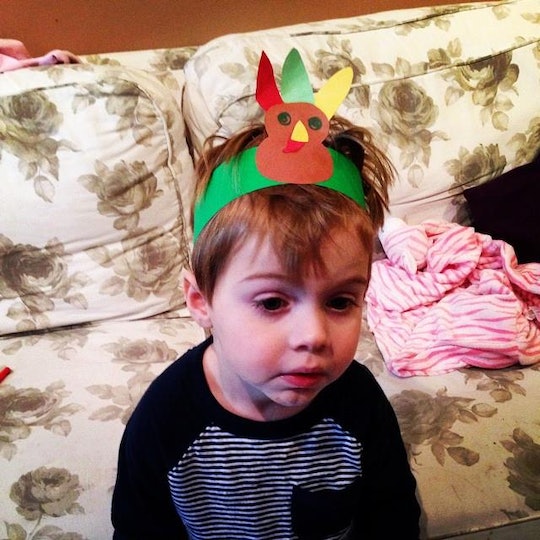 10 Things Your Toddler Is Probably Thinking On Thanksgiving

Growing up in a tight-knit Italian family meant that every Sunday I would get together to eat dinner (...at 3 o'clock) with my grandparents, aunts, uncles, cousins, and a zillion other people who were not aunts, uncles, or cousins but who were nevertheless given those titles. Since I attended massive family gatherings every few days, I never quite got the Thanksgiving hype. Aside from eating turkey instead of pasta (and there is always a pasta dish in addition to the turkey at an Italian-American Thanksgiving, because if we don't eat pasta, I'm pretty sure we die), it was basically exactly the same as any other night. Isn't this just a Sunday dinner on a Thursday? It just wasn't a big deal for me.

Now that I'm an adult, I'm a little more in the spirit. Another thing that has helped me get into the swing of things is having kids, because I get to see them making the kind of memories with the next generation of my loud Italian family that I made (though these days it's my loud Italian-Puerto Rican-German-Irish-Polish family). My kids are 4 years old and 18 months old now, and while children do inspire a kind of holiday magic most of us haven't felt since we were children, the downside is that having kids is that holidays do not stand a chance of being even the slightest bit relaxing (at least for the first few years until they can play, unsupervised, for hours at a time, and don't need you to fix them a plate and cut up their food into microscopic pieces because you're terrified of choking hazards. I once cut their grapes into eighths. EIGHTHS.) Even if you're going over someone else's house and don't have to deal with cooking or cleaning, you're going to be on your kids like a hawk, because chances are that house is not child-proof and you're paranoid about them toppling your cousin Veronica's ridiculously fragile crystal parrot collection.

Toddlers stand upon the precipice of independence, so as a toddler parent you have a healthy mix of fun holiday experiences with them and crappy ones that leave you wondering why you didn't fake an illness and just stay home, because it would have been so much easier. I personally don't remember what being a toddler on Thanksgiving is like, but based on my experiences with my kids I can guess some of the following...