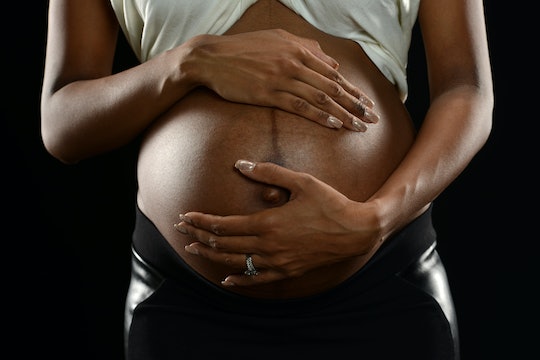 Pregnancy can be absolutely wonderful, or the absolute worst. Unfortunately, both of my full-term pregnancies fell into the latter. I was sick nonstop, swollen, and miserable. The only redeeming part of either were the moments when I'd feel the little flutters of movement, because it was an intimate exchange between me and my child. Aside from that, not to be a major downer, my pregnancies were awful. All the insecurity, self-doubt, and totally normal things all pregnant women feel about their bodies became my way of living. It was my new "normal" for nine months (twice) of hell. Sounds fun, right?

OK, so the entire length of the pregnancies weren't all bad. It's a pretty miraculous thing to grow a human inside your body, so I can't downplay all the amazing moments I experienced. There were so many nights I'd sit in the bathtub, rubbing my belly, pleading for each baby to stay put. I knew once they emerged into the world they'd no longer only be "just mine," and I really enjoyed the personal bond I shared with my children when they were in the womb. It's still the one thing no one can take from me.

However, along with those precious moments came a flood of self-esteem issues. Of course my body changed because there was a human being literally growing within the bounds of my person. I had some moments of enjoying the process (the best I could, considering), reveling in my baby giant bump, but most of the time was spent questioning whether or not some of the things changing were "normal" or if, somehow, I'd become a "freak of nature" and the only woman to ever go through some of the weird (and gross) stuff. In fact, you'd be hard-pressed to find many pictures of pregnant me, because I'd become so incredibly insecure about how drastically my body changed (read: betrayed me).

To be clear, I was not abnormal and most, if not all, women go through some of the exact same changes and insecurities. If you're in the midst of feeling the same, don't worry: you're normal, too. We're in this thing together. Promise.