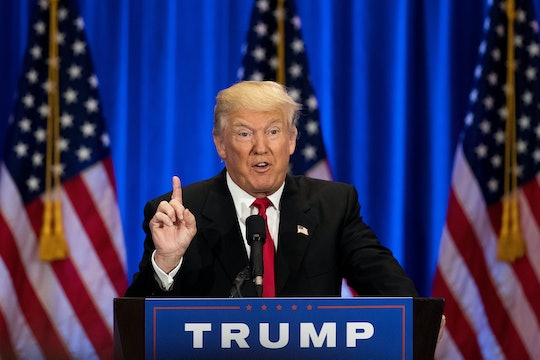 Tomorrow marks the one-year anniversary of the landmark Supreme Court decision affirming the rights of LGBT Americans to have a legally-recognized marriage. In the heat of the raging political battle for the White House, GOP presumptive candidate Donald Trump has had plenty to say about the ruling and how the country would approach the issue of gay marriage if he is elected in the fall. Here are 10 Trump quotes about LGBT families that explain his position against legal marriage, but for gay people, their rights, and civil unions. And no, I don't think he cares that so many of his comments are conflicting.

When it comes to the issue of rights for LGBT people, Trump has been historically pretty open. He employs gay people, attends gay weddings, and said Kentucky clerk Kim Davis was wrong for refusing to certify marriages following the SCOTUS decision a year ago. But Trump has also come out recently in strong defense of what he calls "traditional marriage" and said the Supreme Court overstepped its power and instead should have allowed each individual state to determine the legality of same-sex marriage.

Here are a few of Trump's most notable statements on the topic. Read them and decide for yourself.

1. On his opinion of gay marriage

On CBN's "The Brody File" in 2011, he said, “Well civil unions, look. First of all, I live in New York. I know many, many gay people. Tremendous people. And to be honest with you, as far as civil unions are concerned, I haven't totally formed my opinion. But there can be no discrimination against gays. I'm against gay marriage; I took a lot of heat for that.”

2. On how he's not really that into it

On the Howard Stern Show in 2013: "It's never been an argument that's been discussed with me very much. People know that it's not my thing one way or the other.”

3. On why being gay is a lot like golf

"A lot of people — I don’t want this to sound trivial — but a lot of people are switching to these really long putters, very unattractive," he said, according to the New York Times in 2011. "It’s weird. You see these great players with these really long putters, because they can’t sink three-footers anymore. And, I hate it. I am a traditionalist. I have so many fabulous friends who happen to be gay, but I am a traditionalist.”

"I think the institution of marriage should be between a man and a woman," he said in 2000, according to The Advocate. "I do favor a very strong domestic-partnership law that guarantees gay people the same legal protection and rights as married people. I think it’s important for gay couples who are committed to each other to not be hassled when it comes to inheritance, insurance benefits, and other simple everyday rights.”

6. On appointing Supreme Court justices who would overturn the same-sex marriage ruling

“I would strongly consider that, yes," he told Fox News Sunday in 2016.

7. On how the twice-divorced candidate can say he supports "traditional marriage"

8. On what he would say to a gay grandchild

“Well, it’s the way it is. I gave been against (gay marriage) from the standpoint of the Bible," he told Bloomberg's With All Due Respect in 2015.

“There’s a lot to celebrate this holiday season," he said on the Trump University blog in 2005. "Elton John married his long-time partner David Furnish on December 21. That’s the first day that civil partnerships between gay couples became legal in England under the new Civil Partnerships Act…I know both of them and they get along wonderfully. It’s a marriage that’s going to work……In any event, I’m very happy for them. If two people dig each other, they dig each other. Good luck, Elton. Good luck, David. Have a great life.”

The contradictions are real, and it seems that Trump never plans to clear them up.