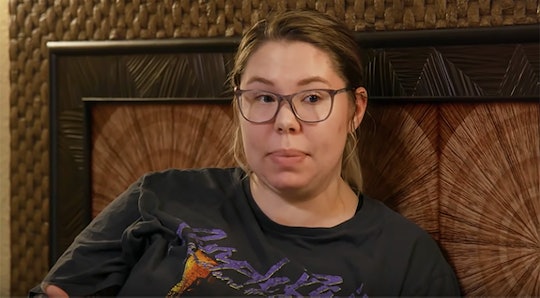 Fans Aren't Happy With Kailyn From 'Teen Mom 2's Attitude, & There Are Receipts

Over the weekend, Teen Mom 2 star Kailyn Lowry sent out some tweets alerting her followers that she won't attend the show's upcoming reunion. And in another tweet, she made a veiled reference towards the series, writing: "The sh*t they don’t show." As for fan reactions? These 10 tweets about Kailyn prove that people think she's ungrateful towards her employer, aka MTV.

Kailyn, who has been with MTV since her time on 16 & Pregnant, isn't a stranger to letting the network know how she feels. Case in point: On March 30, the reality star called out the channel for not treating all of the cast members "fairly." She wrote: "When people aren’t being treated fairly and things are not the same for all cast members across the board, things become hostile."

Although Kailyn didn't name MTV directly, it's fair to assume she had the company in mind when she penned the message. And if you Google "Kailyn calls out MTV," you'll be treated to a plethora of different examples highlighting the mom's ongoing frustration with her employer.

Of course, fans have a few opinions about Kailyn's relationship with MTV. While the reality star does have some sympathizers in her corner, many people are fed up with how she acts towards the network, and there are 10 tweets to prove it.

Fan frustration reached a fever pitch on March 30 after Kailyn announced that she won't attend the upcoming TM2 reunion. "A little birdie told me briana isn’t going to the reunion," she said. "Which is funny cause I’m not either. Let’s see how this goes."

Kailyn didn't go in depth about the reunion drama, but she teased just enough drama to rile fans up.

"Dear MTV, please re-write their contracts to add a giant ego clause. These fucking girls are so full of themselves," one person wrote. "Do they get paid by the tantrum or a flat sum to do what they want. Time to end Teen Mom and let them fend for themselves. That way they can stop bitching about you."

Someone else said: "You are so immature. You would be on the streets if it wasn’t for @mtv and @TeenMom but you think you’re so irreplaceable. You are! And you also seem extremely difficult to work with and miserable. Just quit!"

"This show use to be an eye opener for younger viewers with getting pregnant in high school," another person commented. "Now it’s out of hand and ridiculous. You all have the things you have because of the show. How far would any of you be if the show didn’t go as far as the first season?"

"I think it’s just time for mtv to take it off because what’s the point of even watching it anymore," a fan penned. "People work really hard for the things they have and they get handed EVERYTHING. Plus the drama is out of hand and annoying."

"As much as I love @TeenMom I really think the time has come to call it a day," one commenter added. "Most Moms would love to be in y’alls position, but it seems all most of you do is bitch and moan. The money and fame has led to entitlement and demanding behavior. It’s such a shame."

A fan argued: "MTV is how people KNOW these girls. Once the show is over, the circus moves on. They’re not going to have the same amount of status to sell these things they’ve slapped their names on. People will forget who they are and move on to the next reality 'star.'"

Another person wrote: "Time to grow up! SMDH!! You really need to humble yourself! If not for @MTV NONE of y’all would have what you have! So thank god, count your blessings, grow up and be HUMBLE!"

Another fan wrote: "Welcome to adult life. That is what happens in the real world. Check your ego and do your job."

Another viewer said: "You are acting like a spoiled brat! Welcome to the real world! We work around people daily we can’t stand but have to answer the bell anyway. What a horrible example you are setting for your kids. Go to work!"

"Aw man, if I didn’t go to work every time it was unfair.....I’d be unemployed," someone else joked.

It's important to point here that there are two sides to every story. Although these fans have valid points, you can never know what goes on behind-the-scenes.