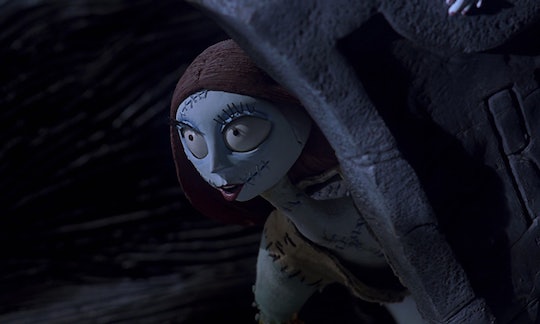 Sally from A Nightmare Before Christmas may have been created by an evil scientist, but she is more self-made than you might initially think once you closely inspect her character. Being that she was made to serve, you would expect her to obey her master like a robot, but she doesn't. Instead she constantly tries to break free from the prison cell and life of servitude she was sewn into. And despite being locked away, and shut out from the world, she is somehow just as intelligent and worldly as her love interest, Jack Skellington, who has had far more exposure than this caged bird. This Halloween, let's delve into some of the ways Sally is a feminist icon in A Nightmare Before Christmas.

First off, Sally's brain seems to be the only one who cares about real issues happening in the world. Her mind isn't tracked solely towards Halloween, like everyone else is programmed to be, in Tim Burton's version of Halloweentown. She seeks more from life than the jack-o-lanterns and black and orange decor people thrust on her. She wants purpose, and drive, and constantly seeks a self-sufficient, ambitious life throughout the film. Here's why she's a total role model when it comes to women everywhere.

1. She Always Picks Herself Up And Puts Herself Back Together Again

Sally never asks her beloved friend, and future boyfriend, Jack to help her escape, or anyone for that matter, because Sally is a self-sustaining badass. When down and out, she literally forces herself to jump out of a window because she would rather die than live a life she has no control over. She also knows that anytime she falls apart, she can get back up again and start over. Throughout the movie we see her sew herself back together time and time again, which is a great lesson to women, and people in general.

2. She Listens To Her Gut

Sally has a strong woman's intuition. She is very perceptive and catches people's vibes instantly. Not only is she talented at reading people, but she also has premonitions. Technically, that is not something she can control, but something that she can is taking the sign to heart. In doing so, she doesn't discredit her thoughts, she owns and respects them. For example, after Sally has a strong sense that Christmas will go awry, she runs and tells her crush, Jack, to do something about it.

3. She Voices Her Opinions

Sally gives some lip to her creator when he complains about how she keeps running off. Instead of being submissive, she talks back. "You're mine, you know, I made you with my own hands" the scientist growls at her. In replace of a head nod, she fires back with a rebuttal "you can make other creations."

4. She Stays Away From Men Who Mistreat Her

Sally repeatedly poisons her master with deadly night shade so that she can make a getaway. Instead of remaining a shut-in or succumbing to a man, she would rather risk her life by jumping out of a window than live a life under a man's thumb. She wants to do more with her life than fulfill gender-oriented domestic duties like cooking and sewing.

5. She Is Upfront With Her Man

Sally is human, so she's allowed to be shy, but in the end she lets her love interest know how she feels through her actions. She does this when she makes an attempt to aid Jack when helping save Santa Claus from Oogie Boogie.

6. She Enjoys Her Own Company

She goes out on her own for walks, to people watch, and attend town meetings.

7. She Saves Herself, And Is A Strong, Independent Woman

She doesn't seem to have any friends other than Jack, and for some reason they never talk about her situation. So to muster up the bravery to try and leave the demanding scientist, she pulls strength from herself instead of others. She also goes on to try and save Santa Claus herself later on in the movie.

Sally's big eyes do a great job at observing the world. Her mind is always working, scheming, and paying attention. Besides, she has to be pretty clever in order to escape a genius scientist. She poisons soup for her creator with deadly night shade, and when he demands her to taste it first she uses a slotted spoon (a spoon with holes). Jack affirms her natural intellect when he says "who else is clever enough to make my Sandy Claus outfit?", and Santa said that Jack should listen to her because "she's the only one who makes any sense..."

9. She Doesn't Depend On Anyone

She never really depends on Jack, she simply loves him for him, but by no means needs him.

10. Sally Is Her Own Person

Overall, Sally is what makes Sally interesting. Unlike Disney princesses, she doesn't have sidekicks or an unhealthy dependence to a man, nope, she has herself. And because of her inner strength and strong will, we should all strive to be like her this Halloween season, and for the rest of our lives for that matter. Like Blink 182 once said "we can live like (Jack and) Sally" if we want.