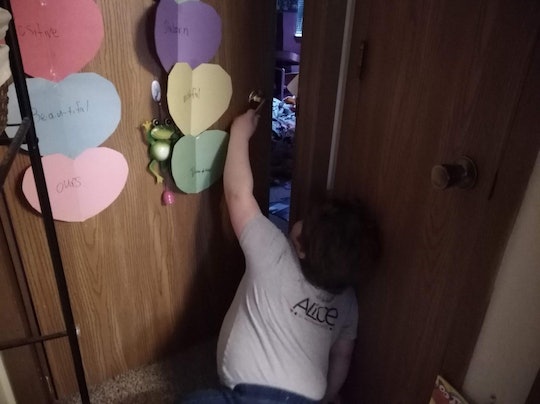 There are 54 million Americans with disabilities, but accessibility is still very poor in many public and private spaces. Often, parents find that the responsibility for advocating better accessibility falls to them; likewise, they are frequently responsible for helping making their own homes more accommodating to children with different needs. Below, one parent explains simple modifications he has made to make his home more accessible.

All parents want to make their kids feel safe, happy, and empowered in their home. Some parents create special play spaces within their home that their kids can feel ownership of, while Montessori-leaning parents place storage furniture at toddler height to encourage their kids to help clean up, or use floor beds at night. For my family, creating an accessible environment for my daughter in our apartment is slightly more complicated. Namine is disabled, but we aren’t allowed to make changes to our living space without express permission from our landlord; even then, they can’t be drastic changes, and the financial burden of those modifications is on us.

Since Namine will be 10 this year, I found 10 ways to improve her home.

When Namine was little, she couldn’t climb. My aunt built her a ramp, so she could push herself up onto the couch. (She preferred to get to the top and just slide down.) The ramp was collapsible, so we’d fold it up and put it under the couch when Namine wasn’t using it.

Namine is tall enough to reach the bathroom sink if she stands up in her wheelchair. This is often what she does when we’re out and about, but she doesn’t stay in her wheelchair in the apartment. She prefers to crawl, so we needed something a little more at her level.

Namine’s sink sits on the floor outside the bathroom. It’s simple: a small table (really, just three wooden boards screwed together, small enough for her) with a water dispenser and a Tupperware bucket underneath. Everything else is standard for what you’d keep by your sink: soap, toothpaste, toothbrush, floss, and mouthwash.

The drink dispenser is similar to Namine’s sink, but we put it on the lower shelf of the refrigerator. We kept milk in it, and since we keep the cereal and other breakfast foods in a floor-level cupboard, Namine is able to prepare her own breakfast in the morning.

For Christmas 2015, we bought Namine an induction stove. It differs from a “real” stove in that the burner itself does not get hot. The pan on it does get hot, of course, so caution must still be taken.

The kitchen counter Namine uses did not come with the apartment. My aunt built it with a counter top and banquet table legs. Most tables were too high for Namine’s wheelchair, so my aunt made measurements so that she’d be able to sit comfortably.

I suppose you could say this one is low-effort, but really, what else can you do about a bathtub? The apartment manager wasn’t about to let us get an accessible replacement for the bathtub.

The alternative was for Namine to get a boost by using a stool. The toilet wasn’t so much a problem; she’s been climbing up onto chairs since before her first foot surgery.

The tub presented a problem, though: she still had to figure out how to crawl in head-first without falling. In the early days, I or Jessica would be her spotter. Now, she does it just fine without supervision.

The commode for the toilet is one of the only actual pieces of accessibility equipment we have. (We do also have a cane in the apartment, but Namine doesn’t use it as intended: she uses it to turn on and off lights, since the switches can’t be moved.) Still, sometimes you can’t beat the real thing. Namine can climb up on a toilet without having the hand rails to grab onto, but who wants to pull themselves up by grabbing the seat? I figure if I wouldn’t want to do it, then neither should she.

The next step from childhood to adolescence was graduation from bath to shower. To get there, though, we had to figure out a way to attach the shower head where Namine could reach it.

We discovered a simple solution: 3M strips and a wall broom holder. We had already replaced the simple shower head that came with the apartment with a dual head, one of which had a long hose. That hose reaches down to the faucet, which itself is low enough for Namine to reach.

Sitting on the floor, Namine can reach things at counter level. This means she can also reach door handles, but round ones are a little difficult to turn.

The manager of our apartment was willing to change out our round door knobs for lever door handles, which Namine can turn with ease. Now she can close her bedroom or the bathroom door without requiring me or my wife to open it again for her.

Our apartment manager was kind enough, once again, to let us remove Namine’s closet doors. We replaced all the hanging clothes — which she couldn’t reach anyway — with a shelving unit that my aunt assembled.

For a while, Namine placed her clothes directly on those shelves, but that became disorganized quickly. Now, she has a square bin for each type of clothing — short-sleeve shirts, long-sleeve shirts, pants, shorts, and so on — which she can slide down and put back herself.

As Namine has grown, we’ve taught her about her conditions and why she needs certain medications. She’s old enough and mature enough now that we keep her non-refrigerable medications next to her sink. When she’s getting ready in the morning or evening, she’ll dose out her medicine and take it.

(I know this isn’t for everyone. Every child is different, and not every child can be trusted with dosing out their own medication. I wanted to mention it though, because it’s worked for us.)