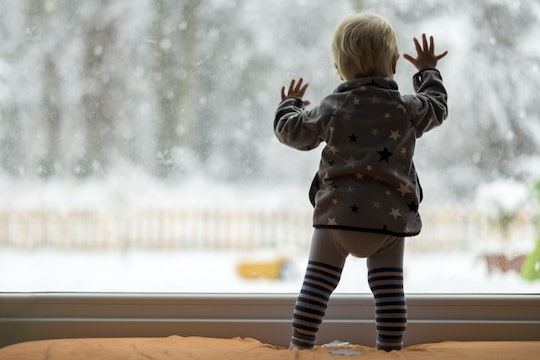 10 Winter Items That Can Be Surprisingly Dangerous For Kids

Winter is my favorite season. There's a festive feeling in the air, the sports almost all revolve around snow, and there's hardly a moment where it's not socially acceptable to drop everything to cozy up with a cup of tea and a book. However, winter with kids can complicate things — especially if they're little. Kids' and babies' mouths and hands touch everything, and that can be risky. It turns out there are a lot of winter things that can be dangerous for kids if you're not careful.

It starts even with something as simple as how you dress your child. Hoodies with drawstrings pose not only a choking hazard to the youngest children, but also a strangulation hazard. The same goes for zippers and buttons they can get into their mouths to chew, according to the New York State Department of Health. The pull mechanism or the buttons can detach, posing a choking hazard for young ones. Hand-me-down or over-worn footie pajamas are also an unlikely risk. When the plastic grips on the bottoms rub down, those footie pajamas become like ice skates on slicker surfaces, even more so than socks. Yes, they're warm and cozy, but need to be checked occasionally for grip.

Although, if your kids are anything like mine, they'll rip the pajamas at the seams long before the grip fails. Kids are so hard on footie jammies. But here are 10 other winter items to look out for.