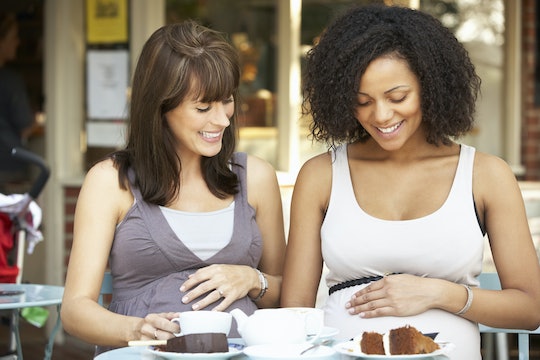 10 Women Reveal The Food That Maybe, Possibly Made Them Go Into Labor

When you reach the final days of your pregnancy and the doctor tells you that all systems are a "go" for baby to make an appearance, your brain usually kicks into “get this damn kid out of me” mode. Medicine and science? Yeah, they all go out the window in favor of old wive's tales. For example, more than a few older moms and relatives were quick to suggest I eat foods that "bring on labor." I know I'm not alone on the "eat whatever will help this kid out of my body" front, so I recently asked my peers about the foods that made them go into labor (maybe? possibly?) and the answers really ran the gamut (and a few were a bit scandalous, so we have that going for us).

I, of course, tried everything to naturally induce labor. At first there was spicy food, courtesy of the local Chinese restaurant in our seaside Queens neighborhood (even though it gave me horrible gas and even though I could barely handle the sight of vegetables). My husband’s grandmother suggested raspberry tea, so I went and bought a Costco-sized package of the stuff, even though I hate fruity teas. That didn’t work either. My final meal before going into labor ended up being a lobster roll and clam chowder. However, after already being a week overdue, I'm going to assume it had less to do with the lobster and more to do with, you know, time.

Despite being the daughter of a fertility specialist physician father, I was convinced my baby was going to just remain in my belly and pregnancy would be a way of life for me from here on out. When my husband’s aunt remarked that I looked a little green towards the end of the evening on the night that I eventually went into labor, I really didn’t think anything of it. “Oh, yeah, well. I think that’s just my coloring now. Anyway, goodnight!” So maybe there is something about lobster helping move things along labor wise. One can only wonder.