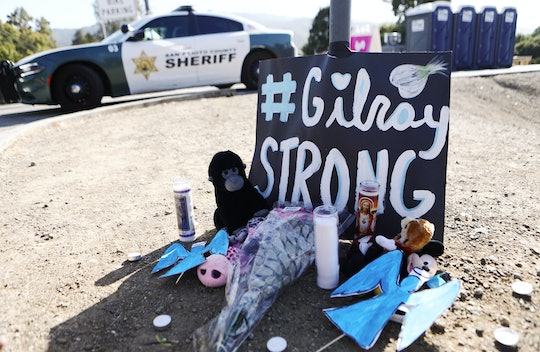 Following the tragic shooting that unfolded at the Gilroy Garlic Festival in Northern California on Sunday, stories of bravery and heroism continue to emerge. Most recently, the nation learned of a truly brave 10-year-old girl who saved a toddler during the shooting, and now she's rightfully being hailed as a hero. Candice Marquez, the girl's great aunt who was working a stand at the festival with her sister Cheryl Low, detailed her niece's valiant and brave moment to the press in the days after the deadly, senseless act of violence occurred.

Marquez recalled the moment the young girl sprung into action in a recent interview with the Associated Press. As she explained to the news outlet, according to KRON 4, they'd just gone to the bathroom before the shooting happened, and when they exited, they heard what they thought were firecrackers. However, when they realized it was actually gunfire, the young girl spotted a 3-year-old toddler, who happened to be the son of Marquez's boss, in the open and immediately protected him, as she told the AP.

"She was brave," Marquez told the news outlet. "She grabbed him and put him under a table." Marquez added in the same interview that her niece looked the gunman right in the eyes, but he did not shoot at her or the young boy.

In a separate interview on Monday with CBS' This Morning, Marquez detailed what they witnessed and shared that her niece's actions were, indeed, heroic. "She's a hero," she said of the moment.

Marquez also spoke about her niece's heroism further in an interview with Good Morning America on Monday, saying, "She was actually a hero... She grabbed him and hid him under the table so that he didn't get shot."

The young girl's grandmother, Cheryl Low, also went on to tell Good Morning America she believes her granddaughter saved the young boy's life. "In my eyes she saved his life because he doesn't understand a lot. He was so confused," Low said, also sharing that her granddaughter is understandably "a little scared" following the shooting," but fortunately she "she seems okay."

Both Marquez's niece and the 3-year-old boy survived the tragic shooting, which left three people dead, two of whom were children, and several more injured, according to CNN. As the Los Angeles Times reported, a 6-year-old boy named Stephen Romero and a 13-year-old girl named Keyla Salazar were killed in the shooting. The third shooting victim was 25-year-old Trevor Irby, according to ABC News.

"Any time a life is lost, it's a tragedy," Gilroy police chief Scot Smithee said at a press conference on Monday, according to the Los Angeles Times. "But when it's young people, it's even worse. It's very difficult."

While this horrific and senseless act of violence may feel impossible to overcome, stories of heroism — like this brave 10-year-old girl who undoubtedly helped in saving a young boy's life — can help bring comfort and a sense of support that good does indeed exist during such a difficult time.

More Like This
Family Of Grandfather Killed In Highland Park Mass Shooting Say He "Saved" Their Lives
Is It Safe To Keep Using Period & Fertility Apps In A Post-Roe America?
A 10-Year-Old Child Was Denied An Abortion In Ohio
Lauren Conrad Shares Experience With "Lifesaving Reproductive Care" After Ectopic Pregnancy