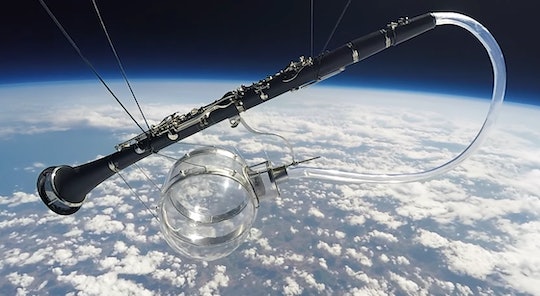 When 10-year-old Elin Day-Thompson was asked to think about the things she'd want to take with her should humans have to relocate to Mars, she came across a problem: how would she play her beloved clarinet while wearing the space helmet traditionally needed by astronauts to breathe? Spurred by the Institute of Engineering and Technology's Life On Mars contest, the young girl invented a "space clarinet," which could make woodwinds playable in space.

In an effort to inspire young people's interest in aerospace engineering and space travel, the Institution of Engineering and Technology teamed up the long-running British children's comic Beano to challenge kids to make their favorite item suitable for use in space. The Life On Mars competition was open to children ages 6 to 13, according to Clasicfm.com. Earlier this week, a panel of judged selected Day-Thompson and her "space clarinet" as the winning entry.

"Elin's design really captured the imagination of the judges and it was wonderful to see the intricate level of detail she'd considered to ensure the clarinet would work in space," IET Young Woman Engineer of the Year and aspiring astronaut Sophie Harker told E&T magazine.

"I love playing my clarinet and would want to take it with me [to Mars], Day-Thompson told E&T. "But I realized I wouldn't be able to play it while wearing a space helmet. To make it work, I designed it to have an air supply tank, which would blow air through the instrument; I also added an amplifier to make sure I can hear the instrument due to the change in air pressure and gravity."

As part of her prize Day-Thompson got to see her "space clarinet" go from design drawings to real-life 3D prototype. Then the lucky 10-year-old got to help launch into the edge of space. According to a video the Institution of Engineering and Technology made of the launch, Day-Thompson's "space clarinet" soared more than 21 miles above the ground, experiencing temperatures of -81.4 degrees Fahrenheit, before the balloon carrying it popped and it floated back to Earth via parachute. All told, Day-Thompson's "space clarinet" traveled more than 70 miles from where it had been launched in Ashbourne, Derbyshire to land near Scunthorpe, North Lincolnshire, Worcester News reported.

"It's amazing that my clarinet design is the first in space!" Day-Thompson told E&T. "It was really inspiring to attend the launch and learn from the engineers on site." Even Harker seemed to be impressed with the "space clarinet's" journey. "It was an exhilarating experience to watch the clarinet head up above the clouds," the magazine reported she said.

While Day-Thompson has told E&T that she dreams of one day becoming an astrophysicist, I hope she also continues to play both the clarinet and her space-suitable invention.