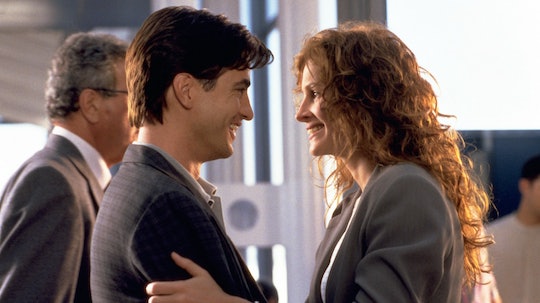 11 '90s Rom-Coms You Look At Differently As An Adult

For whatever reason, the 1990s were a golden age of romantic comedies. Whether you love them or hate them, you couldn't escape these flicks during that decade. But like many other trends from the era, they look a little different once you're a bit older and wiser. In fact, there are loads of '90s rom-coms you will look at differently as an adult. Although it may feel strange to watch these films on a streaming service instead of a VHS, you will probably enjoy the nostalgia factor alone.

But like everything else, some of these films stand the test of time better than others. Looking back on them some 20 years later, the films do feel pretty uniform: their characters are overwhelmingly white, straight, cis, and (more or less) middle class. There are some exceptions, of course, but for the most part these movies aren't as diverse as more modern flicks. And when you really dig into them, the movies have some strange dynamics at play and some things that make you go hmmm.

That said, it's still fun to look back and reminisce. Fortunately, the fashions are just as radical as you remember, and the soundtracks just might inspire you to get a new playlist. As far as the plots, well, they will probably make you realize just how much older and wiser you have become in the past two decades.