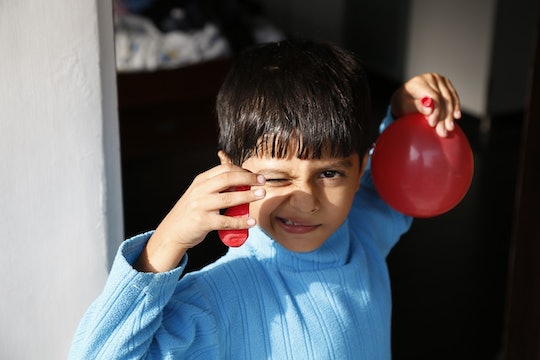 April 1 is like Christmas Day for pranksters. Otherwise known as April Fools' Day, it's the one day of the year when playing practical jokes on other people is acceptable and even expected. You may not have even thought about celebrating April Fools' Day since you were a kid, but being a parent is the perfect excuse to let yourself have a little April Fools' Day fun this year. If you want to celebrate all that is awesome about April Fools' Day with your little ones, you need some April Fools' Day pranks for kids to play that are fun, but won't totally destroy your home.

As History.com noted, the origins of this holiday aren't exactly known, but April Fools' Day gained popularity across Britain in the 18th Century. The tradition of pranking friends and family has continued around the world ever since. This year, April Fools' Day is a Saturday, leaving you and your family plenty of time to pull all sorts of pranks on one another.

But if you aren't good at coming up with pranks on your own, don't worry. This list of shenanigans is totally appropriate for even some of the tiniest jokesters, and will leave everyone in your house laughing — unless, of course, the joke's on you.