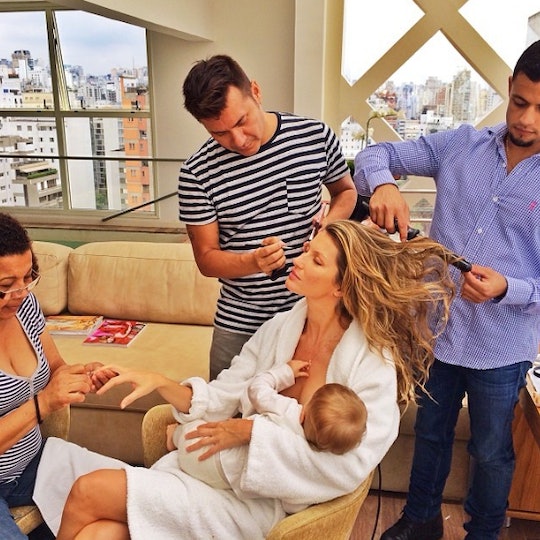 11 Celebrities Who Decided To Breastfeed Past 1 Year

Like many parenting topics, breastfeeding is subject to hot debate. You would think that something as universal and natural as nursing would just be accepted. But it seems like the proper way to breastfeed and how long to continue it is yet another topic of discussion. Is there such a thing as nursing for too long? Well, that depends. There are many moms, including a number of celebrities, who decided to breastfeed past one year. because they felt it was best for them and their child. And who are non-nursing moms to argue with them?

According to the Mayo Clinic, extended breastfeeding is nursing that continues past the baby's first birthday, and it is recommended for as long as moms wish to continue. Although it may seem unusual in cultures where babies are only breastfed for the first six months or so, potential health benefits for the baby include great nutrition and increased immunity, as further explained by the Mayo Clinic. Even if it seems unusual for Westerners, plenty of moms continue to nurse babies well into their toddler years. Including some of Hollywood's finest.

Nursing a child is a great equalizer. That's why plenty of singer-songwriters, models, and actresses made the call that extended breastfeeding was right for them, even if it still feels a bit of out place in the culture at large. Read on to see who kept on nursing their babies past the one (or sometimes two) year mark.